Agriculture and regional Australia are incredibly reliant on diesel fuel, so when Black Sea turmoil sends prices through the roof, it’s of concern to everyone. International oil prices have spiked in the past fortnight, but have we seen the last of the pain just yet?

World oil prices have increased as a result of fears over oil shortages caused by the war between Russia and Ukraine, and more specifically, the impact trade sanctions may have upon the flow of Russian oil into world markets.

At its peak, brent Crude oil reached over $US 128/barrel a little over a fortnight ago. (figure 1) Since then though, the market fell 30% to $100 as Iraq indicated it will be able to increase production to take up the slack, and demand may reduce again due to COVID-19 lockdowns in China. However, in recent days, news the EU may join the US Russian oil embargo has pushed the price back up to $US 117/barrel.

So why haven’t our fuel prices taken a drastic fall yet? Prices at the bowser in Australia don’t exactly reflect the movements in the international spot price – there is always a delay involved as it takes time for stocks to be purchased, product to land on shore, and in some cases be refined.

The proportion of Australian refined diesel has declined sharply from 50% in 2015, to less than 20% currently, with over 80% imported as ready to use product from Singapore, India and South Korea (figure 2)..

In recent times, Australia has held in inventory, around 21 days of diesel consumption, and 30 days of gasoline use (Figure 3). Our reliance on imported diesel, combined with low inventory levels mean that Australia is rapidly exposed to fluctuations in world oil prices.

As such, we can expect that fuel prices will reflect the average import prices paid as of around the last ~30 days. Using this rule, we could theoretically expect that diesel prices would probably peak around early April and then begin to decline. However, it’s not that simple – diesel importers, refiners, and retailers also take a profit margin, which can vary, plus panicked consumers filling up early could run down stocks faster than normal.

On top of the high oil prices, the Platt’s 3-2-1 crack spread reference margin indicated that refiners on average are also making inflated margins, adding over $30/USD (~30%) per barrel, or 18¢ AUD/litre to the price of refined fuels, compared to $9 (~10%) prior to the outbreak of war. Even our struggling domestic refiners are most likely making good profits too, as none received a Government support FSSP payment in Q2-21/22

When we dissect Australian petroleum import data, we can see that in addition to higher import prices, our estimate of the implied profit margin at the terminal for diesel has risen 80% from 15¢/ litre to 27¢/litre in the last six months, and the GST tax component has also increased 38% to 18¢/litre in line with the heightened prices. (figure 4) Given that fuel prices dipped earlier than would be expected in theory over the last week, it is possible that terminal and refiner margins may have been trimmed to support customers recently.

Fuel is expensive at the moment, but recent falls in international oil prices signal that the pain may abate in the very short term. That said, the price increase cycle in Australia has may not reached its peak just yet, as old petroleum stocks bought at the height of the market probably still have to work their way out of the supply chain, and selling margins could expand again.

However, we may not have seen the last of high oil prices this year as prices have risen sharply again in recent days, and China’s demand will return when lockdowns cease. 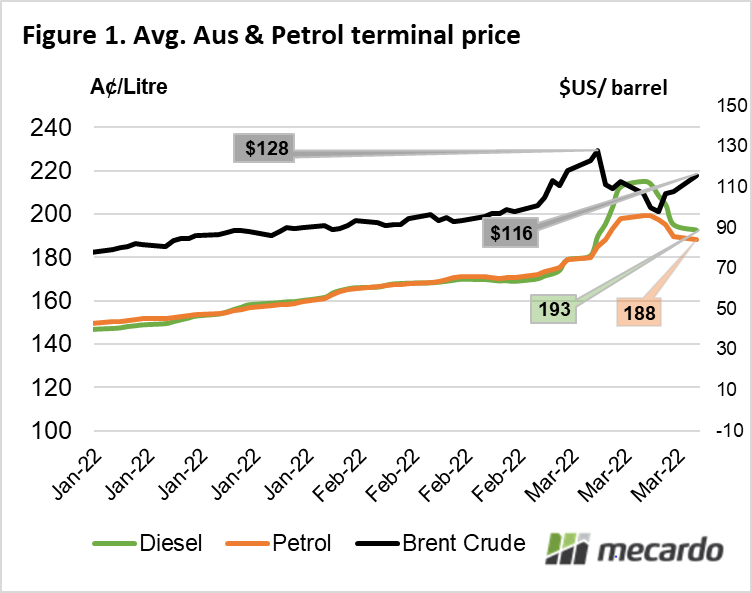 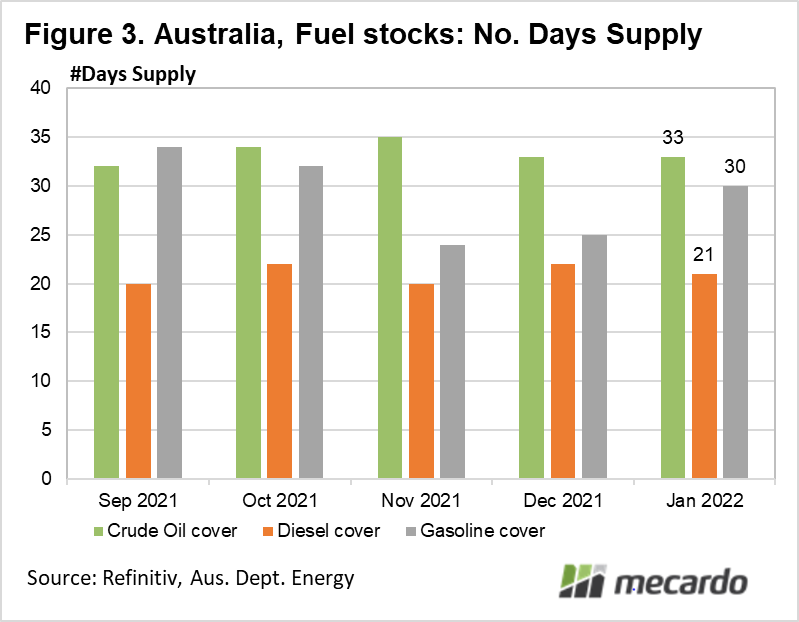