The Australian cattle markets were upbeat this week with Heavy Steer prices surging ahead 9% to reach new records, and Medium Cow prices have kept rising, while the Eastern states Young Cattle Indicator (EYCI) pushed back over the 1,000¢ mark again.

Yardings and slaughter numbers both grew by similar proportions last week, both putting on 2% from the prior week. However, considering the numbers more carefully, with slaughter growing by 2,299 head and yardings by only 781 head, the supply/demand balance probably actually tightened somewhat, at least in relation to cattle being offered through traditional saleyards. Remember that on average, in excess of 85% of Australian cattle slaughtered are procured by processors via the direct over the hooks (OTH) channel.

When we break down where the changes emanated from, the increase in yardings was led by a 19% increase in NSW and 9% lift in VIC, but offset by a 10% fallback in QLD numbers.

Slaughter numbers lifted in all states apart from Tassie, with the big states of NSW and QLD the main source of momentum.

There was green ink in all the places that mattered on the National Indicators, with the slide in Heavy Steer prices seen over the last few weeks turning around in an extraordinary manner, putting on 37¢ lwt (9%) this week to reach a new record high of 452¢/kg lwt, with Medium Steer prices lifting 23¢(5%) to 444¢/kg lwt.

90CL frozen cow prices slipped back 18¢(2%) last week on the back of both the appreciation of the AUD last week, and slightly weaker prices in US dollar terms. Steiner surmises that buyers are resting on their laurels post labour day holiday demand, and a dip this time of the year is nothing unusual.

The good news is that we can expect some of that exchange rate based devaluation to be recovered this week, because the Aussie dollar was devalued over 1% against the US greenback this week, which should flow through to support next week’s 90CL benchmark quote.

The week ahead is looking considerably drier, especially in comparison to the solid drenching received in NSW/VIC last week. With prices so upbeat, especially in heavy cattle, sellers may be tempted out of the paddock to take advantage, so some mild consolidation is on the cards, especially since the excitement over Brazilian mad cow scare is looking less likely to have major ramifications for the market in the medium term. 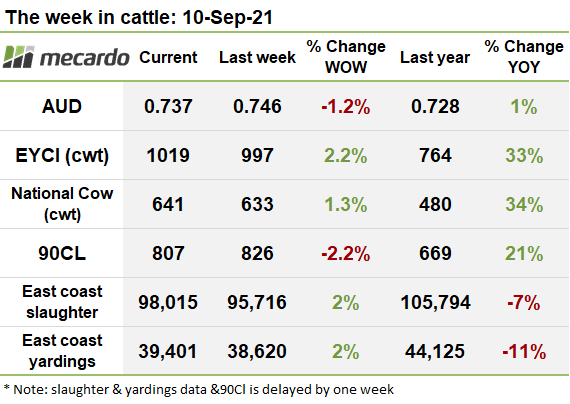 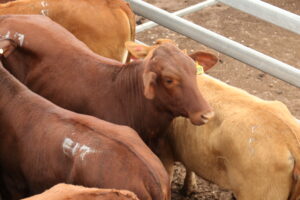 The last week has seen the release of September quarter slaughter data, along with Meat and Livestock Australia’s (MLA) cattle industry projections. As always, we