Heavy Steers light a fire under the EYCI

It seems that the voracious demand for young cattle has almost no end in sight, with the EYCI continuing to spiral skyward to reach, yes, another record of 954ȼ/kg this week. Unseasonably large contractions in slaughter and yardings, along with a lifting market indicate that the market is continuing to tighten this winter.

Against the typical trend at this time of year, yardings plunged 17% last week, almost back down to the rock bottom level we were seeing a couple of weeks ago. The largest relative reduction of 25% was seen in VIC.  Let’s make no bones about it though, at 37% below average, this is still a record low level of offerings for this time of year, however, we do need to consider this through the lens of the significant rise in popularity of online auctions in the last year or two.

East coast slaughter also slipped last week, down 10% on the week prior, with kills in QLD taking the largest hit, at 15% down. Similar to the yardings story, slaughter is currently at the lowest level in ten years for this time of the year, 31% below the 5-year average, and a whopping 42,000 head below what could be considered typical. This is indicating that producers are holding back cattle in earnest, preferring to leave them growing in the paddock.

The EYCI added another 12ȼ(1%) for the week, reaching yet another brand-new record high of 954ȼ/kg cwt. This was on the back of 10,652 head, 15% higher supply than the prior week, indicating that it’s not just low supply driving the market up, but also accelerating demand.

Roma store fetched 974ȼ/kg, while Dalby was a bit more lacklustre at 906ȼ/kg cwt. Wagga prices averaged 982ȼ/kg, with yearling steers priced at 1,007ȼ/kg,  2% above the vealer prices achieved there.

This week there was mostly green ink for the national indicators, with restocker steers lifting, and heavy steers staging a mighty recovery, seeing an incredible week on week increase of 10%, suggesting they are more than a little oversold last week when they plunged 6%.

Heavy steers increased a massive 42ȼ this week to reach 426.2ȼ/kg lwt, with the main impetus coming from NSW, where prices skyrocketed a whopping 64ȼ(16%) to 463ȼ/kg lwt with good support also supplied by QLD and VIC markets.

Unsurprisingly, with the tailwind of a huge lift in the heavy steer prices, restocker steer prices also fared well, lifting 24ȼ(4%) to 578ȼ/kg lwt. On the flipside however, processor and medium steers lost ground, respectively losing 10ȼ(2%) and 8ȼ(2%) to settle the week at 490ȼ/kg lwt and 409ȼ/kg lwt. Medium cows also faltered, shedding 1ȼ(<1%) to finish up at 298ȼ/kg

The Aussie dollar suffered another steep fall of 1.3%, bringing it down to 0.743US. The devaluation is mostly a story of an appreciation of reserve currencies like the US greenback due to a safety and cautious “risk off” sentiment occurring as global equity markets fall in response to concerns about the impact of COVID-19 resurgence in the global economy and higher than expected jobless figures in the US.

90CL frozen cow prices crept up a marginal 2ȼ(<1%) last week, to 785ȼ/kg swt, but that was mostly on the back of the depreciation of the Aussie dollar, as prices in US terms actually slipped slightly. That said, as we discussed earlier this week, import volumes into the US are still tight and Steiner reports that US buyers expect that the price could reach up to $8.80AUD in the short term. Although this price ramp up is considered transitory,  so exporters might have to take advantage of it quickly before it evaporates..

Another solid dump of rain is forecast for the week ahead, with the BOM predicting that large parts of NSW and VIC are set to receive 25-50mm. Looking further out at the preliminary long range forecasts from Weatherbell, which use the European ECMWF model; they are suggestive that Australia might just fall under another the influence of a weak La Niña out to January, and the outcome of that is a very significant chance that above average rainfall will occur in NSW, VIC and Northern QLD as far out as January.

The huge ramp up in heavy steer prices coupled with what looks to be another good season ahead is likely to provide producers with confidence to both withhold cattle from market, and add to restocking demand, which should solidly underpin the market. 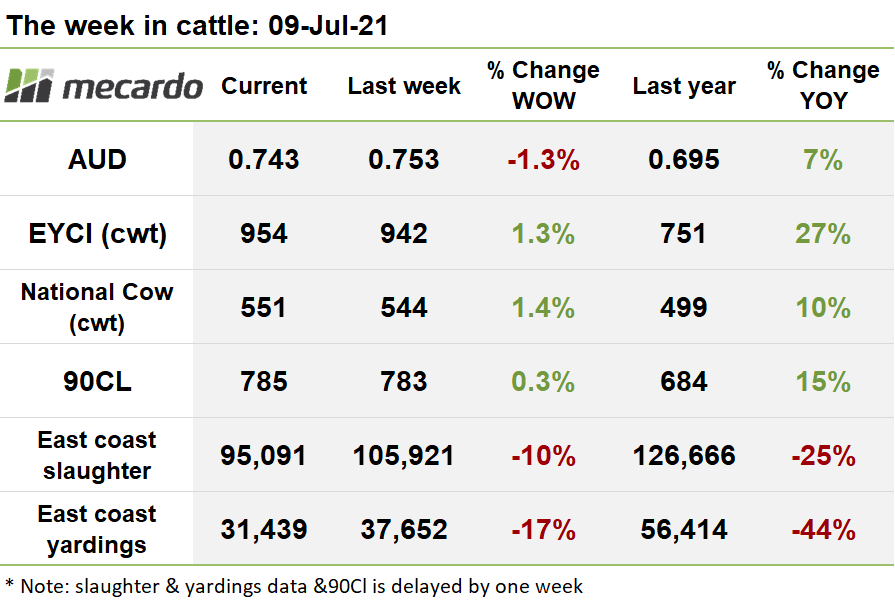 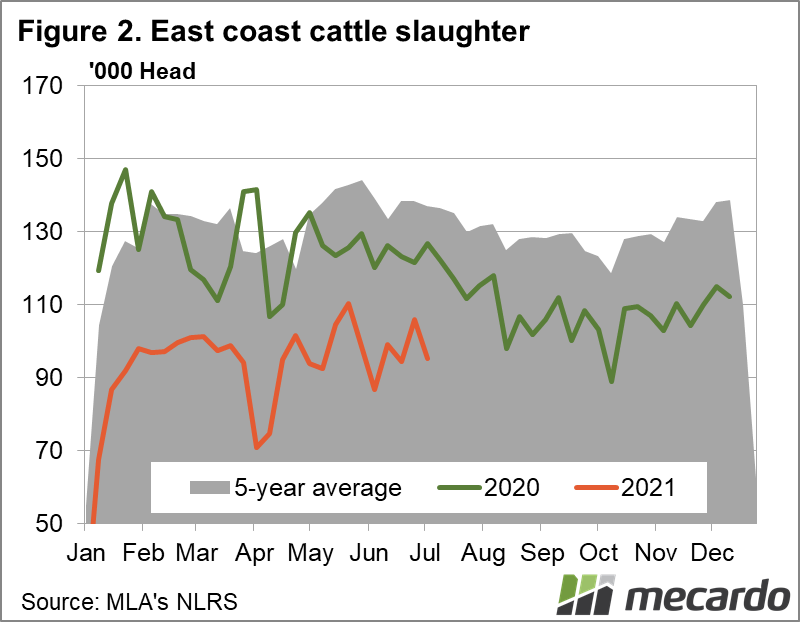