Forecasts for the cattle herd rebuild have been lifted due to both the continued excellent seasonal conditions in southern Australia, and a drop in the estimated slaughter rates for the year. This means less production then previously forecast but this hasn’t equated to less tonnes of beef forecast to be exported, as the average carcass weights rise and estimates of last year's exports have been revised higher. This is despite exports for the first four months of 2022 being back 12% year-on-year.

Little has changed in terms of producer sentiment in the south in the first six months of the year. In MLA’s Cattle Industry Projections released in February, seasonal conditions were encouraging producers to continue to rebuild herd numbers, and they were being assisted by above average joining and branding percentage. The July industry update retained this view. However, in the northern cattle regions the remainder of the wet season didn’t pan out as they would have hoped, which may put the brakes on their intentions to rebuild.

Nevertheless, total herd number forecasts have still been revised higher from February to July, with MLA now predicting cattle numbers to reach 27.583 million head in 2022 – a 5.6% increase from the previous year. This is an extra 380,000 cattle than their initial forecast this year. Forecasts for the following two years have also been lifted, with MLA now predicting 2024 herd numbers to be 11% higher than 2021 – in February that forecast was 8% higher.

Cattle slaughter projections have been brought right back, from 6.7 million head in February to now just 6.1 million yead. This is a rise of just over 2% year-on-year, compared to the 11% rise forecast earlier in the year, and is being put down to processor capacity – or a lack thereof – rather than a supply issue. Production is now forecast to lift about 5% year-on-year in 2022, with record high carcass weights (320kg) offsetting some of the stall in slaughter. Looking longer term, both slaughter and production are now predicted to have gained 23% by 2024 (down from 31% and 32% respectively in the February projections).

In February, MLA’s projections said a range of industry analysts expected the Eastern Young Cattle Indicator to fall to 998c/kg by the end of June 2022, and while it has dropped to its lowest point for the year, it is still currently at 1070c/kg. That prediction is that it will now drop further to 953c/kg by the end of the year, as cattle supply increases faster than processing capacity picks up.

The latest projections of more cattle but less slaughter, teamed with lower exports for the year so far and continued hurdles in the processing and global supply chain, all points to downward pressure on cattle prices in the second half of 2022. That said, prices haven’t dropped as much as previously expected for the first half of the year, and strong rebuild intent alongside potential processing capacity increase should keep plenty of demand in the market, and limit any significant drop-off in the short term. 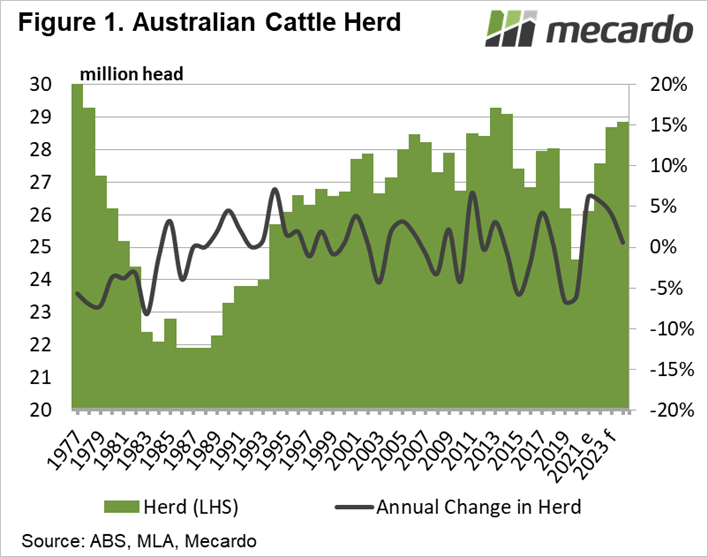 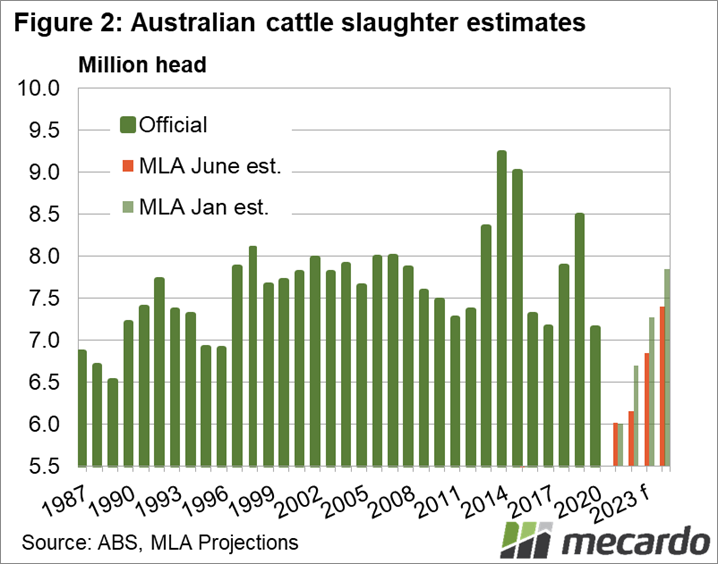