The latest refresh of Mecardo’s processor margin estimates is showing more light at the end of the tunnel, with margins improving substantially to get tantalizingly close to break-even over the course of 2021. Despite this likely improvement in fundamental business conditions for the beef industry, it has been insufficient to encourage higher exports.

The Mecardo Processor margin model refresh for May 2021 has returned a result that suggests that conditions for the beef processing industry, while not in an ideal situation have continued to display improvement, with the break-even point now tantalizingly close to being achieved.

Key drivers for the change in estimates centre around improvements in the export prices achieved for beef, a more favourable exchange rate environment, and even the total estimated coproduct yield lifting.

On the margin equation, the cost of some key inputs has fallen, with the cow price backtracking 7% since January, albeit offset by the rising Eastern Young Cattle Indicator, and electricity prices downshifted. In addition, the price attainable for the outputs of beef production have improved, with the Japan fullset price lifting 7% and the US 90CL pushing up almost 10%. Similarly, the total price for the combined suite of coproducts also fetched an additional 7% since January 2021.

Despite the estimated improvement in processor margins, this has not translated to increased overall export volumes. Export volumes for year to April were 24% down on 2020 levels, and even the typical seasonal dip in volume from April compared to March has been considerably deeper than usual (figure 3). Exports to most destinations are substantially down, except for South Korea, and the Philippines and various smaller niche destinations.

The lacklustre export numbers suggest that not enough Australian beef is available at competitive prices to our global customers at present, and considering that many processors are probably losing money at the moment, it is not surprising that supply to international markets has not lifted until the profitability situation has been rectified.

With processor margins on an upward trajectory, the latest estimate of -$61, which is up 163$ or 72% from the start of the year, suggests that the beef industry may be slowly heading towards a more sustainable situation. While lethargic export volumes are largely a story of tight supply, with the global beef supply and demand balance tightening up, there may be more pull from export markets for Australian beef in the months ahead. 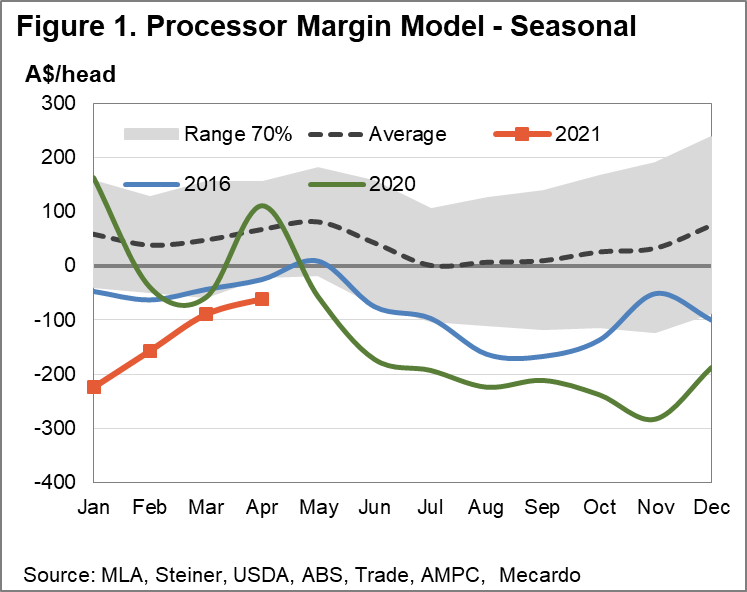 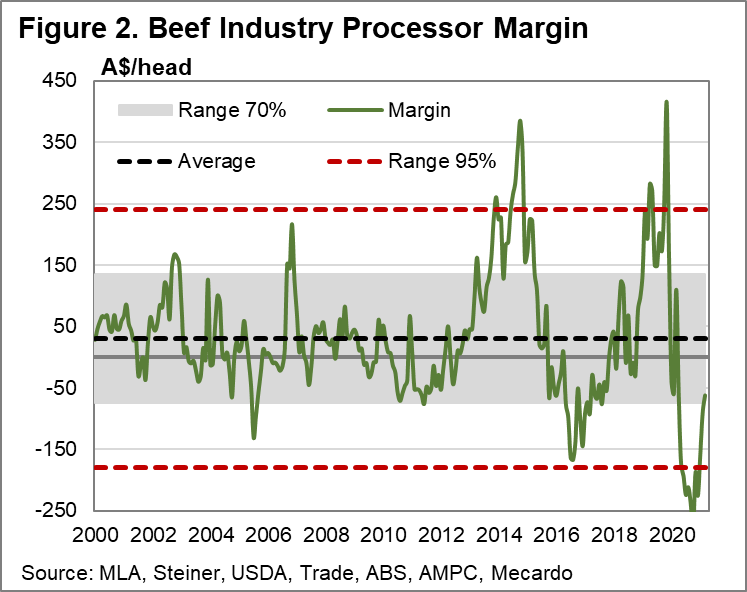