Over the hooks or by the books

When selling cattle, producers have the choice between booking a sale via the Auction channel, or ‘hooking’ direct to processors. We don’t know the exact numbers going over the hooks (OTH), but we can make an educated estimate from the data available. Today we take a look at the implied ratio of hooking to booking in the cattle market and discuss any predictable seasonality we can see in producer behavior.

When the time comes for thinking about cattle turnoff, the question of OTH sales or saleyard auction needs to be addressed.

Firstly, let’s take a look at what the industry, in general, is doing. In Figure 1, Mecardo has estimated the east coast “Hook to book” ratio – where implied non-auction OTH transactions as a % of total slaughter are depicted. Within our calculation, we assume that, conservatively across Australia, 60% of all cattle yarded in traditional saleyards make their way into the hands of restockers, backgrounders or feeders, not processors.

MLA data on reported feedlot and restocker purchasing activity within auctions in the last few years also reports that restockers are estimated to represent around 35% of auction transactions, with feed lotters making up 23% since 2017, implying that the Australian auction market purchases are dominated by a 60% proportion of non-terminal restockers and feed lotter purchases.

Overall, we estimate that around 85% of cattle for slaughter in Australia is procured via a non-auction, OTH marketing channel, where actual transacted prices and volumes are effectively private, and not transparently reported to the market. This figure is elevated with the inclusion of a direct OTH destination for any finished cattle exiting feedlots.

This is consistent with submissions to the ACCC by the processing industry back in 2017 asserting that over 90% of Australian slaughter cattle are procured via non-auction systems. (view report here).

The structure of the industry has a high degree of influence upon this national statistic, as the prevalence of feedlots in QLD and northern NSW causes a bias in cattle towards OTH booking, because the business model of feedlots involves strong contractual and business relationships direct with processors.

ACCC (2017) suggests that the Auction marketing channel, with its regular and timely public price reporting provides a mechanism whereby an efficient and transparent marketplace can exist.

What is generally accepted in the industry is that the Auction market tends to lead the evolution of over the hooks grid prices on offer as it’s the primary mechanism of price discovery in the cattle and beef market.

Processors are known to maintain an active buying presence in auction markets, even when their grids are full because the traditional saleyard Auction system provides a convenient and reliable method of obtaining high volumes of cattle, at verifiable, objective and publicly reported prices. It’s these public prices that maintain the efficiency of the industry, and enable a competitive basis for issued slaughter grids to be compiled.

Over the hooks volumes can be influenced by the volatile market conditions, with producers opting to remove (some) risk by forward contracting, securing price as well as processor access.

Where there is an environment of tight cattle trading margins, alongside future market risk, forward contracts with processors can seem more attractive, allowing price risk to be managed.

The start of 2021 was also characterised by unseasonably high implied proportions of OTH sales (Fig 1), which was related to low yarding’s numbers in the saleyards. The record high EYCI, (Fig3), coupled with the high “hook to book” ratio, suggests that processors were struggling against strong competition from restockers for cattle as producers purchased cattle to replenish drought depleted herds.

It’s also apparent that that over autumn to early winter, March to May, volatility in marketing channel usage by producers’ reigns, with the hook to book ratio spiking and plummeting, suggesting that the search for the best value marketing channel may be a more complex decision during this time.

The MLA national OTH indicator for 240-260kg cattle (Fig 2), shows that in the March to May period, the OTH prices swung 6-10% in the last three years. In addition, Figure 3 shows that despite relative autumn EYCI price stability over a 5-year average, 2018, 2019 and 2020 did see EYCI price movements of 10-15% over the March to May period also. This suggests that price volatility in both OTH and Auction markets drives the need to carefully assess available options to make optimal marketing decisions.

Combining these observations, price volatility at this autumn to early winter time of year appears to drive more changeable decisions by producers on how to market their cattle, and that marketing strategy needs to be adapted according to the seasonal conditions to capture the maximum value.  To execute this in practice, with careful consideration of the particular specification of cattle you are marketing, one must continually assess whether the full range of OTH grids or the trends within auction markets are likely to provide the best prices.

Overall, the majority of slaughter cattle in Australia are transacted in the private direct to processor marketplace, while at saleyard and electronic auctions, Restocker buyers are the majority. March to May has historically been a time producers as a group are re-assessing and more readily switching marketing channels to the most beneficial option. With a scarcity of cattle, and feed in paddocks, processors face an ongoing battle against restocker competition in the saleyards, so the OTH option offered to producers is likely to remain competitive. 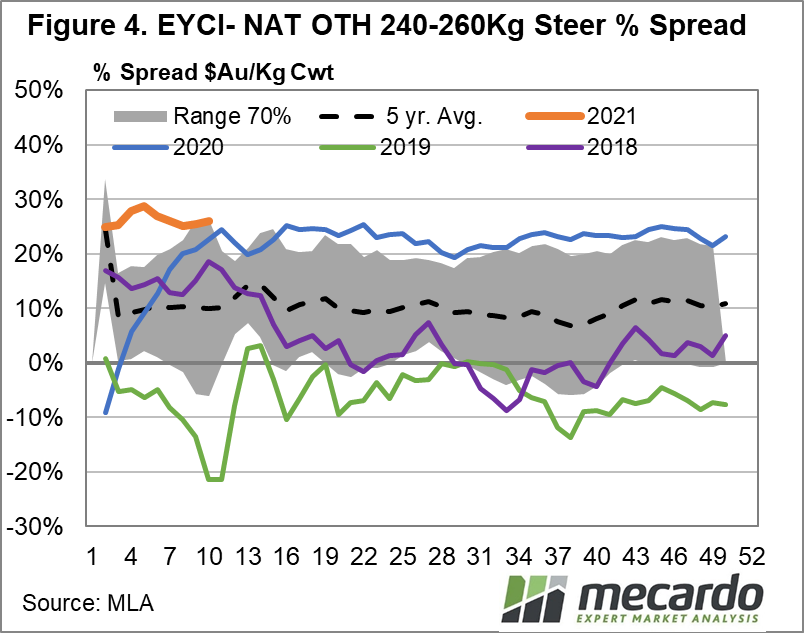