I’ll tell you what

Everyone loves statistics. You can’t watch sport now without being bombarded by them. For our last article of 2019 here is a review of the key livestock stats for the year just gone. This has been largely put together so you can demonstrate your knowledge of markets to your mates at the pub on Christmas Eve, your family over Christmas lunch, or a bunch of blokes and ladies you see once a year at the Boxing Day Test, or your equivalent.

Let’s start with the big winner for the year, sheep. The Eastern States Trade Lamb Indicator (ESTLI) averaged 766.5¢/kg cwt, 13% higher than 2018. The ESTLI has now averaged higher prices for seven years in a row (Figure 1).  The peak for the ESTLI was 943¢ in July, the low was 637¢ in March. The high provided a very handy 48% reward for carrying lambs for four months.

On a state level, NSW had the highest average Trade Lamb price, with their indicator averaging 775¢/kg cwt, followed by Victoria at 752¢, SA at 750¢, WA at 703¢ and Tasmania at 701¢.  It wasn’t that long ago that we were scoffed at for suggesting the price could get to 700¢ at all, and now we’ve seen it average that for the year.

For the cattle markets, the year has been more solid than extraordinary. Young cattle prices have suffered from the drought with the Eastern Young Cattle Indicator (EYCI) averaging 488¢/kg cwt.  Figure 1 shows the EYCI average was 4.5% below 2018 and at its lowest level in five years.

For Heavy steers, we can look at the NSW Heavy Steer Indicator. Heavy Steers have gained ground this year, averaging 1.6% higher than 2018 at 521¢/kg cwt.  Figure 2 shows Heavy Steers in NSW had their third best year on record. In Victoria, Heavy Steers were more expensive, at 552¢, while Queensland was in between the two, averaging 536¢/kg cwt.

A great year for sheep and lamb markets, an okay year for cattle. So what about next year? We know the missing ingredient for cattle was rain, and projections remain very strong if some grass can be grown. For sheep and lambs things are likely to get better too. Supply isn’t going to rise and it doesn’t look like demand is on the wane.

To all our subscribers, have a safe and happy festive period. The Mecardo team wishes you a wonderful break with family and friends and hope that the new year brings a fantastic start to the next decade. 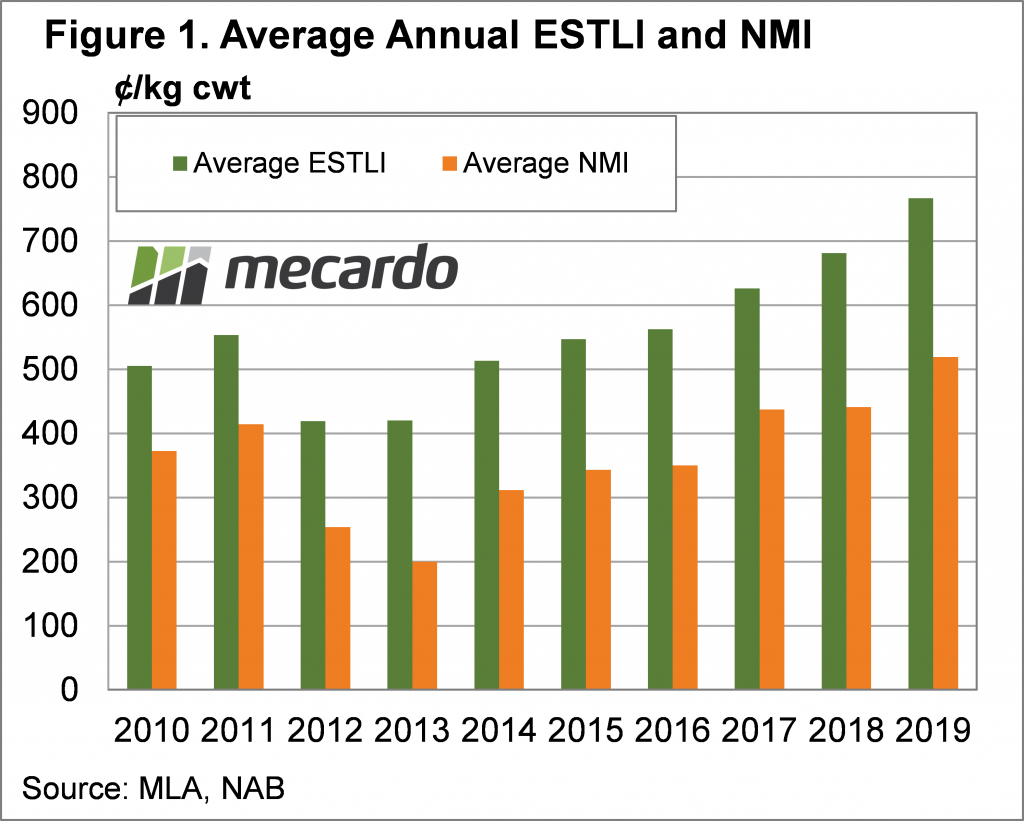