The cattle market continues to track along lethargically, supported by tight supply; indicated by the stubbornly low slaughter rate. The EYCI has slipped slightly, however, looking to the west, the WYCI jumped 41¢, or 4%, adding to the dream upward run it's been experiencing all year. The excellent weather outlook (at least for those who aren’t going to be flooded) for the next week ahead will bring both more grass in the medium term, and transport difficulties from boggy roads that will reduce yardings and slaughter; so we might be set for a buoyant week ahead in cattle markets.

Yardings have bounced back 5% after last week’s steep fall, with QLD leading the recovery, pushing up 21%, followed by VIC at 5%, however, offerings in NSW backtracked 11%, and SA plummeted 24%.

Slaughter continues to struggle along, falling 4% last week, so it’s clear that processors are continuing to have a hard time sourcing cattle for production.

As expected due to support from continued low yardings and slaughter figures, the EYCI only made a lethargic movement for the week, shedding 7¢ (<1%) to finish the week at 856¢/kg cwt.

However, when we look at the pricing situation over a slightly longer horizon, the EYCI has slid 33¢ (4%) since the high of 888¢/kg lwt that was set at the end of January.

The national categories were a story of contrasts; with the heavier side of the market benefiting, but feeders, and processors fell backward.

No major jackpots were being awarded this week, but Heavy steers were the standout winner, advancing 8¢(2%) to settle at 364¢/kg lwt. Medium steers and medium cows followed up with a 4¢ and 1¢ gain, to respectively close at 384¢/kg lwt and 277¢/kg lwt.

Unlike last week, where they saw upward movement; Processors and Feeders lost out, both falling 3¢(1%) to end the week at 447¢/kg lwt and 440¢/kg lwt.

Vealers continued on the casual downward trend set last week, sacrificing 4¢, to settle at 498¢/kg lwt, having lost 9¢ (2%) in the past fortnight.

The Aussie dollar was effectively stagnant, barely backing off 0.1%, to finish the week at 0.776USD. On the Macro front, evidence that the Aussie economy is roaring along has emerged, with February jobs data surprising the market. A net 89k new jobs were created in February, pushing our unemployment rate down from 6.3% to an astounding pre-COVID level of 5.8%. It even caught the RBA by surprise, which was forecasting a 6% unemployment level by the end of 2021.

The 90CL US frozen cow price shed 3¢(<1%), trickling down to 643¢/kg. Prices for Aussie ground beef in the US are being supported by continuing low supply into the US, despite US domestic beef prices coming off as the pressure of supply disruptions from the extreme cold snap weather events have eased. Early US import monitoring data for March indicates that Aussie shipments of beef to Japan will be almost double that to the US, and South Korea’s intake of Aussie beef will surpass that of the US also. This supports the current understanding within the US beef industry that exports of Australian beef to the US are down due to price premiums being present in Asian markets.

The weather forecast for the next week is looking wet, wet, wet with 50-100mm expected right down the east coast, except for tassie. In some cases, more rain than is welcome is due to fall, with the BOM predicting over 300mm of rain coming over the weekend in the NSW mid-north coast.

With paddocks and roads soggy and boggy, it may be difficult for many producers to transport cattle as planned next week, so we can expect that yarding’s to be sharply down, especially in NSW. Timely delivery of cattle for OTH sales is likely to also be affected, so slaughter can be expected to dip as well. However, the rain will strengthen demand, and bring buyers to the market- both restockers; and processors looking to replace cattle no longer coming in via the grids channel. As such, a lively week can be expected next week. 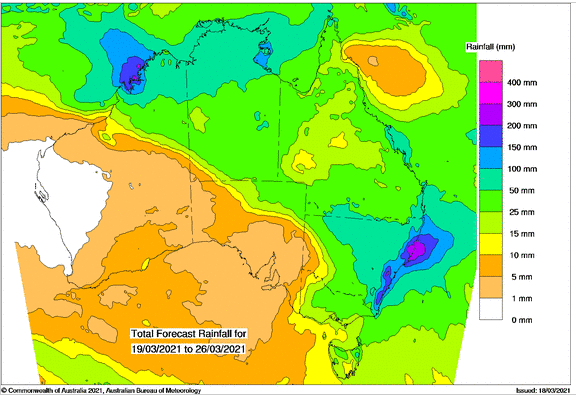