The price for Australian lamb rose to dizzying heights in 2020, and maintained its elevated status into 2021, but is Australian lamb expensive on the international stage? Today we look at how Australia stacks up to the EU and our traditional rivals across the ditch, New Zealand, with which our price competitiveness appears to have eroded.

Despite Australian lamb prices tracking at elevated levels currently; in comparison to many EU counties Australian lamb is still relatively cheap in aussie dollar terms. This is an important yardstick to assess our competitiveness in the international landscape.

Looking at figure 1, Irish lamb prices at $9.50 AUD /kg cwt are currently around 13% above the Eastern States Trade Lamb Indicator (ESTLI) while the UK is even pricier, at $10.37 AUD /kg cwt, representing a 23% premium to Aussie prices. France however, takes the crown for expensive lamb, currently at an eyewatering $11.00 AUD /kg cwt.

Lamb production in Europe and the UK operates in a very different manner compared to in Australia and NZ. Government support to agriculture in the form of subsidies is also available to their farmers in varying degrees.

Typically, flocks in Europe and the UK are smaller, meaning higher costs from reduced economies of scale. Climatic conditions such as winter snow can require the seasonal purchase of feed, and the need for shelter facilities like barns to protect them from extreme weather. Even the lambs themselves are smaller, with the standard EU trade lamb weighing in at 13kg cwt. All this adds up to structurally expensive sheep meat in the EU.

One of the supporting factors for the ability for French lamb prices to remain significantly elevated above that of most countries in the world is the uniquely French consumer behaviour. Patriotic nationalism and perception of the high quality and superiority of French agricultural products have created a material preference for purchasing lamb produced in France, supporting the local market.

Romania however, is a very different story. At just $4.17/kg, this represents a whopping 50% discount to the ESTLI. There are multiple reasons for this though- in Romania, lamb is mostly a seasonal food, consumed at Easter, and the sheep are a multipurpose dairying breed “țurcana”, making the meat less desirable in European markets. Romania also has insufficient slaughter capacity for the size of its flock. As such, Romania is not an export destination for Australia, it is however, exporting to the middle east at an increasing rate, and in 2017, was the largest live sheep exporter in the world, sending 2.42m head of sheep abroad. (Cazacu, 2018)

Despite Australia’s obvious relative price competitiveness, Europe, at 11kt p.a., representing around 4% (figure 2) of our export volumes; is a small but significant export destination for Australian lamb. The UK currently accounts for around half of that volume, so the on-going Free Trade talks with both the EU & the UK are significant.

Moving the focus to our largest export rival, NZ, where we can see that lamb prices at $6.00 AUD currently trade at around a 28% discount to the ESTLI.

Over the last five years, Australian lamb prices tend to trade at an average 10% premium, with the spread typically narrowing seasonally over spring when the ESTLI falls due to spring lamb supply. We are in abnormal territory at the moment, with our competitiveness eroded. As we progress through winter, we are unlikely to see a narrowing in the spread for some months.

There’s both good, and bad news here: Australian lamb prices are at high levels at the moment, but comparatively speaking, they are not expensive compared to the domestic prices seen in other parts of the world like the EU. Disturbingly New Zealand lamb is $2.40, or 30% cheaper than Australian lamb. This level of discount is much larger than the 10% average over the last five years, putting Australian lamb at the largest export price disadvantage for years. This could translate to a loss of market share or price a correction if this situation persists into the long term. 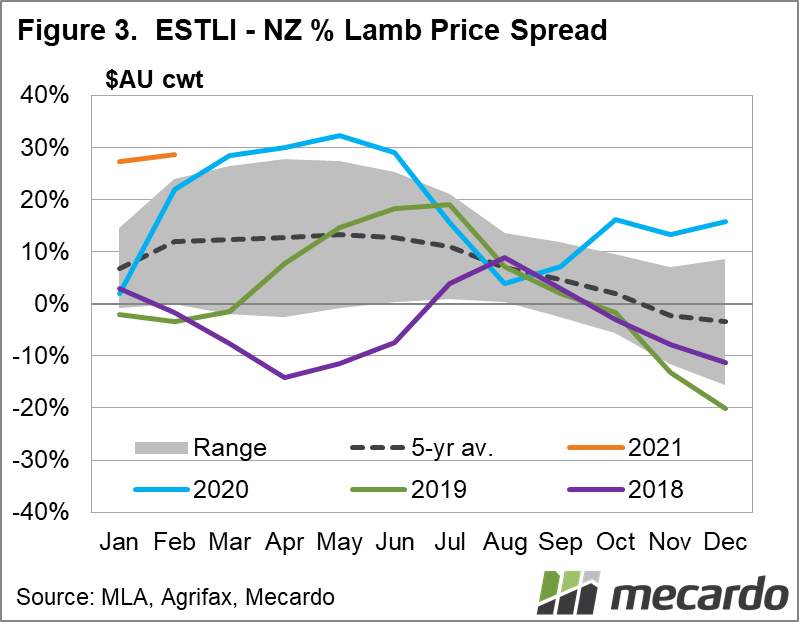