Last week Mecardo used excellent IWTO material to review volumes of selected quality schemes from an international perspective. This week we go a step further, with various underlying assumptions, and construct a micron distribution for the international merino RWS supply.

The assumptions required to build the micron distribution discussed in this article warrant some caution, as some will inevitably be wrong. For a start there is a mix of seasons in the data, with updated volumes for Australia and South Africa while the 2020-21 IWTO data is used for the other countries. This was done as the volumes have increased substantially in Australia and in South Africa this season. Secondly, the focus of the article is on merino wool which required divvying IWTO RWS volumes up between breeds. For New Zealand it was assumed some 80% of the ZQ wool (included as RWS) was merino and for Argentina/Uruguay it was assumed all of the IWTO RWS volumes related to their merino clips. If these caveats have not turned you off, read on.

Figure 1 shows the constructed RWS merino fibre diameter distribution from the key southern hemisphere wool producers. The fibre diameter range runs from 13 through 25 micron. South Africa provides a solid base in the merino supply between 17 and 21 micron (supplying approximately one third of the overall supply in this analysis which is a mix of seasons). The New Zealand supply is skewed strongly to the finer side of the merino supply (the New Zealand merino clip averages 17 micron which is some 2 microns finer than the Australian average). On the other side of the distribution the South American countries play a larger role.

The data used in Figure 1 is re-jigged in Figure 2 to show the country contribution to the proportion of each micron category. In this schematic the dominance of New Zealand supply for 16.5 micron and finer wool stands out, with Australia playing a major support role. From 18.5 through 20.5 micron South Africa is the major supplier, and from 21 micron and broader the South American clips become the major suppliers.

Figure 2 is a great schematic to help understand the international nature of wool production and processing. Put yourself in the shows of a greasy wool buyer for a brand which requires RWS accredited merino wool, of a particular specification. You will be considering the availability of wool from a range of countries as a normal procedure. National boundaries are no more important than shire boundaries when thinking about buying or selling livestock. This is a corrective to the often expressed sentiment that “Australia produces the best wool in the world” with the unsaid implication that buyers will come to us whatever we do.

The large premiums which have appeared for RWS wool this season have to an extent upended the pattern of merino supply we have been used to, where Australia dominates by contributing three quarters of the overall merino production worldwide. When RWS merino wool is considered the Australian contribution falls to 20% (albeit these volumes are changing as supply responds to the premiums). The Australian industry might have to work harder and smarter to keep up with the rest of the world. 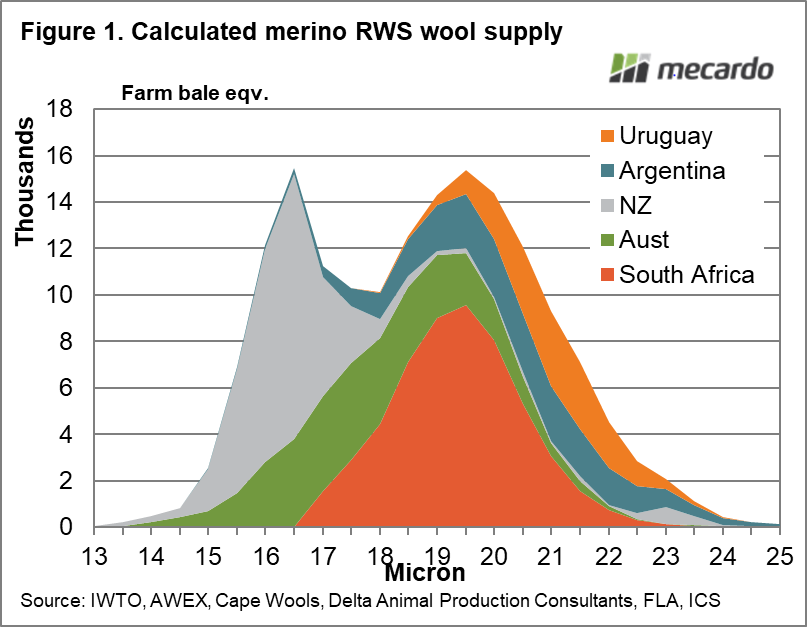