Supplies continue to tighten, and it’s that time of year where lamb & sheep markets make their move to the top. Most categories of lambs and sheep did capture gains, except for trade lambs which ended slightly weaker in most states.

Lamb yardings in the east fell another 8% last week, while it was starker for sheep with a 40% drop reported. While a year-on-year comparison shows that lamb yardings are stronger, last week’s east coast throughput was 5% below the five-year seasonal average. Slaughter is now on the downward run too, with the number of head of lambs processed last week down 10% on the week prior, and 3% below the seasonal five-year average.

The Eastern States Trade Lamb Indicator fell 11ȼ on the week to 826ȼ/kg cwt. On the other side of the country, the Western Australian Trade Lamb Indicator also lost ground, falling 9ȼ to 772ȼ/kg cwt. A look at MLA’s saleyard reports suggests that more trade weight lambs appeared in yards this week, so buyers had plenty of choice. It was a brighter price picture for all other categories of lamb and sheep though.

The National Restocker Lamb Indicator lifted 12ȼ to 840ȼ/kg cwt, exactly the same price that it was 12 months ago. The national indicators for Merino lambs gained 31ȼ to 760ȼ, light lambs were up 17ȼ to 809ȼ and heavy lambs lifted 11ȼ to 808ȼ/kg cwt. Merino, trade and light lambs are all sitting at 42-46ȼ under the same time last year, while heavy lambs are just 20ȼ under.

It wasn’t just lambs on the rise in the east, mutton also made a significant move higher. The National Mutton Indicator (NMI) gained 29ȼ to 681ȼ/kg cwt. Last year the NMI pushed over 700ȼ at its peak, but with sheep supply now stronger, and year-on-year lower lamb values dictating the roof.

Traditionally lamb and sheep supply will find its low within the first few weeks of July. Last year the lamb supply didn’t come until September, so we may have a while to wait before we see prices ease in a significant way. 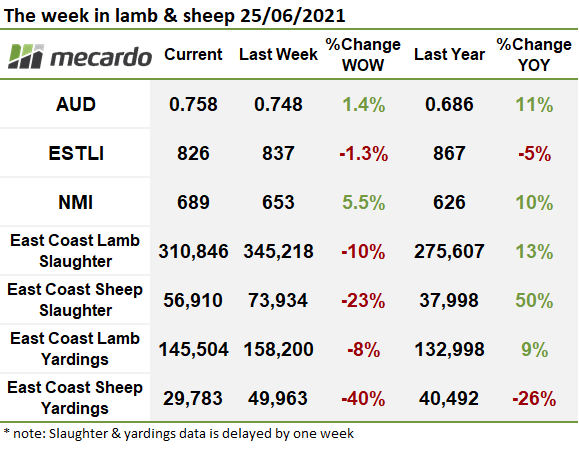 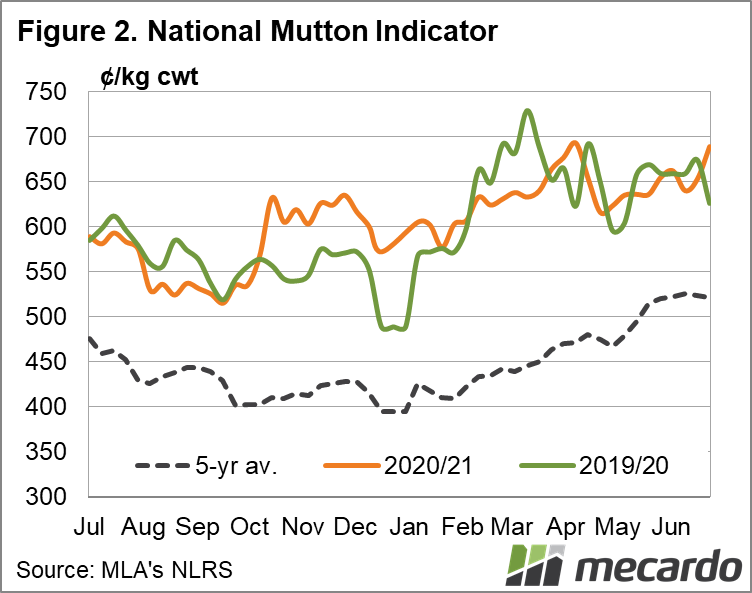