It’s all up for lamb yardings from here

With spring rains there is plenty of grass up and down the east coast, and we saw some of the impacts last week. Growers still have the option of pulling supply back when prices ease - here we look at whether this can continue to support prices.

With the lamb price rally coming to an abrupt halt a fortnight ago, lamb producers responded by pulling back yardings.  On the east coast, lamb yardings fell 39% in response to the nearly 50¢ fall in the Eastern States Trade Lamb Indicator (ESTLI).

NSW was the main contributor to the fall in yardings, figure 1 shows yardings were stripped back by nearly 71,000 head, or 42%, while Victoria was also back, down 30%.  In South Australia, yardings almost halved.

Even though the fall in yardings in NSW was heavy, it was only back to close to the five-year average and last year’s levels. The rallying prices have been drawing more lambs to the yards, we can see in figure 1, that yardings have been well above usual levels.

It is Victoria where the rush of lambs usually comes from at this time of year.  Figure 2 shows that it is generally week 43 when yardings start to increase in Victoria, as new lambs roll into Hamilton and Ballarat with a rush.  The strong southern supplies push Victorian yardings 172% higher from the end of October to the end of December.

The strong Victorian yardings adds 54% to national yardings, so the Victorian spring flush is the main driver of the spring flush.

The last time there was a La Niña it threw out the usual trend of rising yardings by about a month.  Solid spring rains see producers holding on to lambs for more weight gain, rather than selling at the usual time.  Figure 2 shows that in 2010 the rally in lamb yardings started at the end of November, and didn’t get to the usual level.

The rising prices of the last month have drawn more Victorian lambs to the yards than usual, and a lot more than in 2010. The strong yardings earlier in the spring might be a sign of lambs starting to be drawn out, but it might also be a result of weaker direct bookings thanks to COVID uncertainty.

There is little doubt that lamb yardings will rise strongly at some stage, but the question is whether this will impact prices. Figure 3 shows the ESTLI falls all the way into the end of the year on average, and did this last year.

In 2010 the ESTLI had already fallen in October, and went sideways, even when yardings rallied in December.  There is some hope demand from restockers, and the ability to hold onto lambs this year might see a similar trend.  Upside before Christmas looks unlikely however. 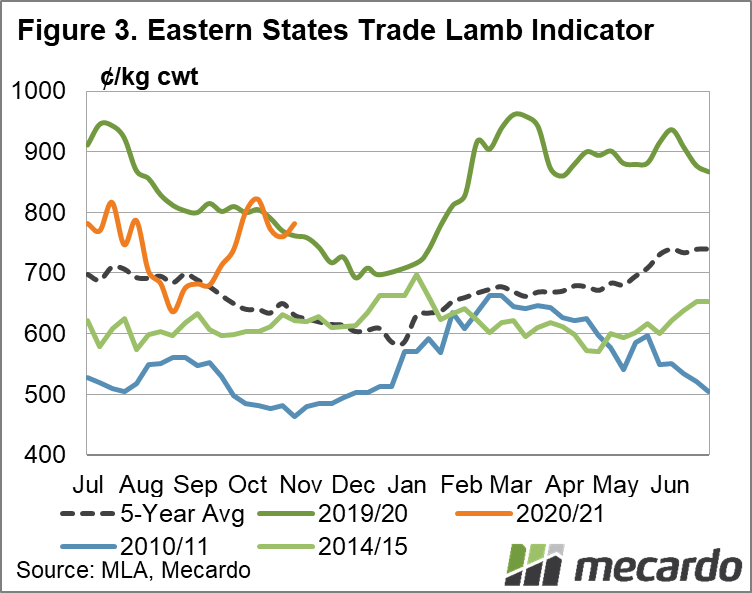