This week the wheat market has ground lower as first, the anticipation of the Jan WASDE report saw market participants take to the sidelines, and then trading the higher ending wheat stocks as reported by the USDA.

Global ending stocks for corn and beans are down slightly month on month, but wheat is seen as increasing (see full WASDE recap here).  This would explain why the net open interest (contracts and options) for wheat has soured recently, moving from a net long/bought position to now a net short/sold position.  This is a fair indication that the speculative crowd are now betting on wheat prices falling into the new year.  That being said, there is still a few significant crop production milestones that need to be met.

Firstly, Brazil’s soybean crop is in the gun.  It is too wet in the North and too hot, dry in the South.  Reports suggest irreversible damage has been done to the crops in the South with another week of +40C to come before rains appear in the forecast.  Production estimates continue to be whittled lower, with CONAB and the USDA posting Brazils soybean crop at 140mmt (down from 144mmt).

US central plains (HRW country) remain very dry and has seen the crop condition rating for top producing state Kansas to plummet.  As mentioned before, condition ratings at this time of year are poor precursors for final yields.  For the record, 2011, 2013, 2014, 2015 and 2018 were poor yielding years for winter wheat.  It is also very dry through the Canadian Prairies, but there is still time for a snowpack to develop or rain to fall leading into seeding. Interestingly, the market is currently trading the forecast of increased winter wheat acres but not the dipping condition of the crop.

Lastly, where’d we be without some kind of geopolitical instability?  Russia has been building up troops on the border with Ukraine creating a fair bit of tension in the area.  NATO and the US are desperately trying to use diplomacy to ease the situation.  A conflict in the area has the potential to cause some disruption to trade flows coming out of the Black Sea.  While everyone’s attention was focused here, Russia sent some troops into Kazakhstan to quell some insurrection that was threatening to destabilise the Russian backed Gov’t there.  Probably not a big issue when it comes to grain trade, but from little things…

Spill over weakness from the WASDE report has seen a strong correction lower and wheat is now below the 100 DMA (day moving average).  We would expect this will entice consumers to take more cover and take advantage of these lower prices. 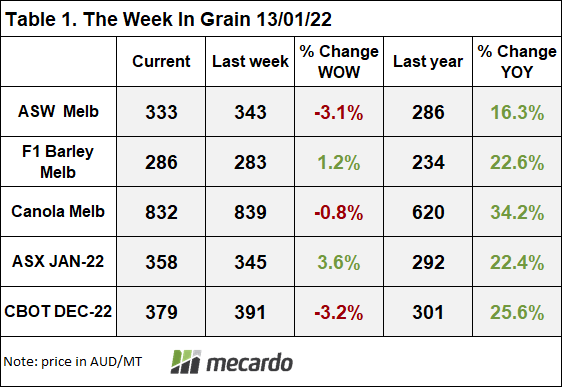