This week has been characterised by a ‘risk off’ attitude as the world awaits the outcome of the US election. Speculative investors have reduced their long (bought) exposure in soybeans and wheat as improving conditions in key global production areas have eased concerns. Corn is an outlier, with speculative money increasing their long position to the highest point in four years.

Wheat reversed its recent downward trend with an impressive bounce early this week, on nearby demand.  Turkey, Tunisia and Syria have tendered for a combined 750kmt of wheat in a new round of demand. This is following the script for food insecure nations to beef up their food supplies.

In Russia, good rains arrived in parts of southern and central Russia aiding wheat establishment. The sowing of winter crops in Russia has reached 18.8MHa or 98.1% of the forecasted area. Temperatures remain 2-4C above average and are providing ideal conditions for the winter wheat crop to establish.

The rouble’s weakness has contributed to record prices being paid for wheat to the Russian farmer.  With these rains, it is possible that the farmer will now start to release more grain into the export pipeline which theoretically should weigh on global values.

In South America, planting conditions have improved.  Argentina is now 27.5% complete, compared to 35% last year and 34% on average, according to the Buenos Aires Grain Exchange.  More rain is needed to alleviate the risk that is, and will continue, to hang over Argentina. Rainfall in Brazil is also leading to improved conditions with soybean planting catching up to average.  As conditions in the Southern Hemisphere improve, this will reduce some of the new crop pressure.  However, with a strong La Niña present this year, there will remain a degree of risk built into the market until harvest.

The Australian market has been rocked by more reprisals following China’s ban on Australian barley.  China is rumoured to have its sights on barring Australian origin copper, timber, coal, sugar, lobster and now there’s talk of wheat.  Wheat is not a major export commodity into China – but it is not insignificant either at about 6% of our export market.

Perhaps the biggest question being asked at the moment is what will a Biden presidency do to the markets?  What will happen if Trump is re-elected?  What if it is a contested election?  Anything other than a smooth transition will likely cause ripples in the currency, equities and commodity markets.  It is going to be an interesting week or so.

It has been disappointing to see cash markets fall sharply on news of China potentially banning Aussie wheat when our market share is relatively small.  It feels like the trade has overplayed this bit.  With good demand for our wheat, I should think that prices will recover in time. 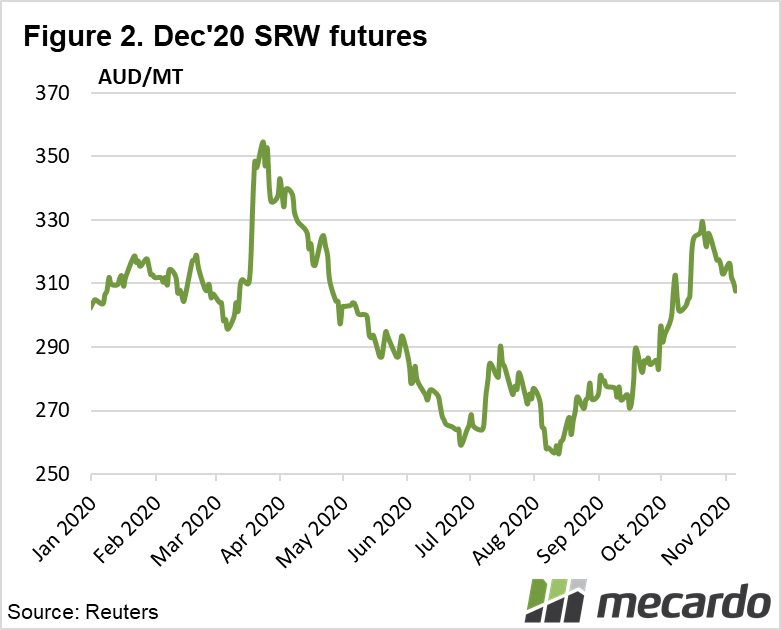