The Bureau of Meteorology (BOM) are due to update their ENSO outlook today, with the call on ‘La Nina’ highly anticipated. With weather systems having already delivered some La Nina like patterns, confirmation, as we move towards summer, would be a boon for cattle producers. Here we look at what past La Nina’s have meant for prices, and whether they can get any better.

There is plenty of talk around at the moment regarding a possible, or probable, La Nina event this spring and summer, and what it might mean for livestock markets.  Historically, it is the cattle market which gets the biggest boost from above average summer rainfall.  When it’s on the back of two years of drought led herd liquidation, La Nina can have dramatic impacts.

The recent extreme young cattle prices suggest we might have seen much of the work in prices done already, but we can take a look back and see how past La Nina events have played out.

We know La Nina is associated with stronger rainfall, but figure 1 puts its effect into perspective.  Analysis from the BOM shows not just stronger than average rainfall associated with La Nina.  The mean rainfall in strong La Nina years is in the top 20% of all years for most of Australia.  Which means when La Nina arrives, it can get really wet, like the floods of 1998 and 2010 that were associated with the phenomenon.

In terms of price, it is of little surprise to see cattle price peaks occurring during La Nina years.  Figure 2 shows the last three La Nina events, and the price of the Eastern Young Cattle Indicator, the NSW Heavy Steer and the NSW Cow.

The peak in 2007-08 looks insignificant on the chart, but it was a moderate La Nina, with little impact on drought-hit areas in NSW. The peaks didn’t arrive until spring 2009 and it wasn’t a record at the time, except for cow prices.

From 2010 to 2012 La Nina spanned over two summers and resulted in consistent record prices for the time. Most of you should remember the 2016-17 La Nina event. It was the most recent, and we saw the strong prices of 2015 move to extreme levels for eight months.

While La Nina has led to record prices, figure 3 demonstrates the peaks even more clearly.  We often look at the EYCI vs the 90CL export price for an indication of the value of Australian cattle. Figure 3 shows that in La Nina years the EYCI trades at a premium to the 90CL, and we have seen this premium improve in recent weeks.

We know prices are already at extreme levels, but the question many are asking is if they can stay there.  This brief look at historical trends suggests that with a La Nina summer, strong prices might remain through to the autumn.

This is relative of course, in late 2016 the EYCI lost 10% as grass finished cattle started to flow.  We could see this again, but if La Nina brings the expected rainfall, the EYCI isn’t heading back to 600¢ until at least the autumn. 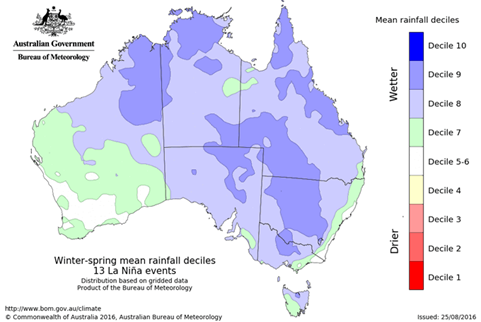 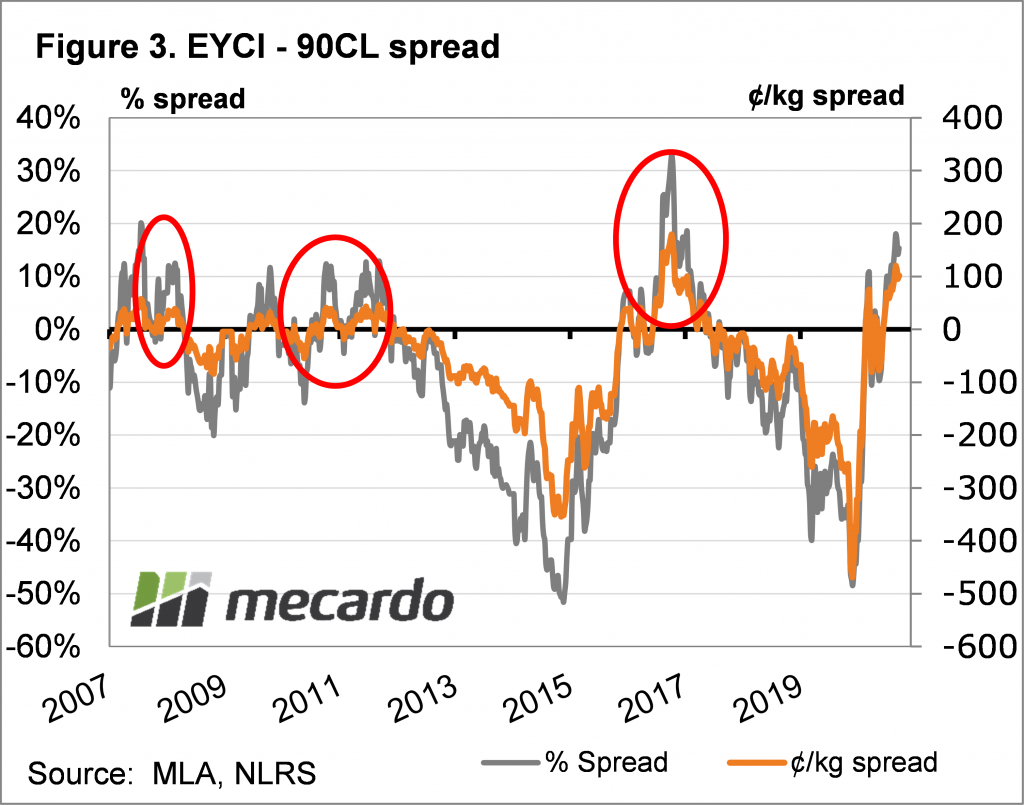