Most sheep and lamb prices have softly slid lower over the past few months. Albeit restocker lambs which continue to bounce week on week. Trade lambs in WA have generally been keeping pace with values in the east, but this week bucked the trend.

The Eastern States Trade Lamb Indicator (ESTLI) found an extra 3¢ over the week to end at 798¢/kg cwt. While in WA, bigger yardings numbers and processors reporting worker shortages due to quarantines saw competition take a dive and the Western Australian Trade Lamb Indicator (WATLI) lost 46¢ over the week to 753¢/kg cwt. Heavy and Merino lamb prices were the only categories in WA to improve slightly on the week.

Light lambs were the biggest mover, with the National indicator dropping 34¢ over the week. This was closely followed by restocker lambs, down 29¢. Light lambs typically find some extra demand as we get closer to Greek Easter with that falling on the 24th of April this year.  Heavy lambs found support in NSW, VIC and WA while edging lower in SA.

Mutton supplies have been on the wane in the east, but prices have been moving within a band over the last month. The National Mutton Indicator dropped 19¢ this week to 553¢/kg cwt, but comparing to a month ago, this is an improvement of less than 1%. East coast mutton yardings dropped 6% last week while in the west, mutton throughput jumped by almost 5,000 head.

An interesting stat this week was an 18% lift in east coast lamb yardings for the week ending the 18th of March. With 170,078 lambs yarded, this is the first time in the last month that we’ve seen saleyard supply at levels close to the same time last year.

There is plenty of wet weather on the forecast for the next week and much of Victoria is looking for that autumn break after a dry summer. If it comes it the right volumes, this should help stem up some restocker interest. For the western market, it may be a few weeks of disruption, if we look at the impact of the omicron wave on east coast processing as an example of what’s ahead. 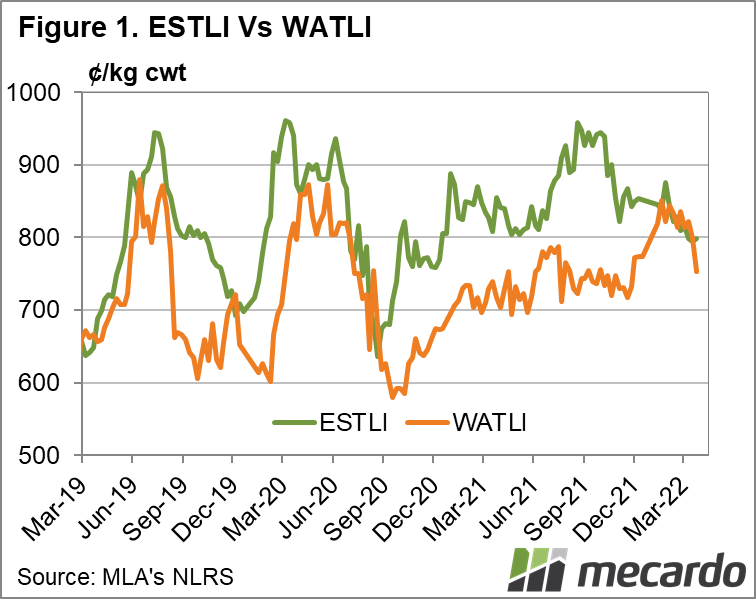