The lamb market in the west is running its own race so far this year as the state experiences strong demand and tightening supply. While trade and heavy lambs have been leading the price charge, the restocker price in Western Australia has also surged this week, with the National Livestock Reporting Service quoting increased demand from feeders in the saleyards.

The Western Australian Restocker lamb indicator closed yesterday at 851ȼ/kg, up 8 ȼ/kg for the week and 171ȼ/kg higher year-on-year – that’s a climb of more than 20%. To put it in perspective, while the Eastern States Restocker lamb price was considerably higher than its WA counterpart as of yesterday, at 897ȼ/kg, it has lost 63ȼ/kg in the past month and sits 85ȼ/kg below year-ago levels.

The Trade lamb price in the west was up 140ȼ/kg year-on-year yesterday, to 836ȼ/kg, and trading at a 13ȼ/kg premium to the Eastern State’s Trade Lamb Indicator which was at 823ȼ/kg, down 3% lower year-on-year.

The mutton price, while stronger than the same time in 2021, has not seen the year-on-year hike the lamb indicators have in WA. It currently sits at 559ȼ/kg, just below the price in the east of 567ȼ/kg.

Seasonal conditions have improved in parts of WA, however much later than the eastern states, and this teamed with significant interstate transfers in the past two years, has delayed their flock rebuild significantly. Although, truck trips across the Nullarbor started slowing significantly less since July 2021 for example about 223,000 head were sent east in January 2022, compared to 992,000 head in January 2021. We can see from figure 2 that sheep slaughter fell below year-ago levels in the second half of last year, but still remained above the five-year-average.

According to the Australian Bureau of Agricultural and Resource Economics and Sciences (ABARES), in 2020–21, Western Australia contributed over 90% of Australia’s live sheep exports, but only 18% of the country’s sheep meat export. In 2021, WA exported about half a million sheep overseas, the lowest number since 1969. It’s only the third time since 2007 that live exports from WA have fallen below 1 million head.  Live sheep exports nationally were 29% lower year-on-year in 2021, and came in at 13% below Meat and Livestock Australia’s forecasted number.   MLA’s latest sheep industry outlook, released in February, doesn’t see a lot of upside for live exports this year, despite the rebuilding WA flock, with numbers forecast to stay on par with 2021 – however they are confident that when Australian prices soften, live export markets will build again.

Lamb slaughter in WA spent the second half of last year trending higher than 2020 and was on par with or above the five-year-average for five of the six months, according to ABS (figure 3). Meanwhile national lamb slaughter was lower than both the previous year and the average for October-December 2021.

The MLA/Australian Wool Innovation October survey results showed more breeding ewes on hand and slightly more lambs to be sold from October-February in WA than the same survey in October 2020, however lambs marked in the past four months (July-October) were nearly 17% less in 2021 then 2020. Both could be indications of why despite the flock growth, lamb supply has been tightening in the West and boosting prices – but neither are likely to be long lived. 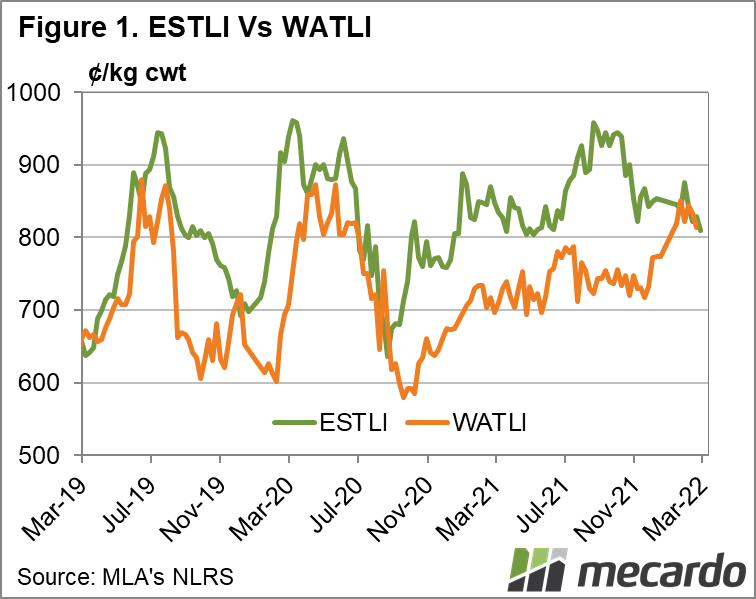