Australian lamb exports have climbed higher year-on-year so far, and Meat and Livestock Australia’s latest predictions expect them to remain that way for the rest of 2021. Mutton exports however continue to feel the pinch of the domestic flock rebuild, well behind last year’s volumes, and with MLA estimating them to finish 2021 making up just 30% of all sheepmeat exports, down from the usual 38%. Lamb exports for the year are expected to finish 6% higher, while mutton will be back 15% - another 3% lower than forecast in June.

After experiencing three consecutive months of record monthly volumes of lamb exports, September totals fell back below year-ago levels, and within the average 70% range. Lamb exports for the year-to-September are now 5% higher than last year after their winter surge, but remain 28% below the record levels set in 2019. The Chinese lamb market had a slow start to the year, but has been above year-ago levels for the past five months, with September volumes up 20% compared to the same month in 2020. Lamb exports to China for the year-to-April were down 22% year-on-year, but are now 2% higher for the year-to September.

Major international sheepmeat market demand has not waived, despite continued high prices, keeping in line with domestic supply and then some. China’s rebound in the second half of 2021 has been positive, and while not to be fixed overnight, issues with freight to the Middle East should be resolved as soon as global transport finds its post-pandemic normal. 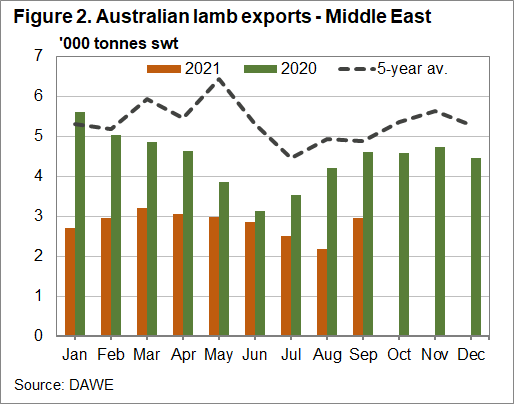