Despite lagging behind the record highs of 2019/20, lamb exports are showing all the right signs so far in 2021, with continued demand from the two largest markets. Total lamb exports for quarter one of 2021 are down 20 per cent year-on-year, and they are 15% below the five-year average for that time period. However the US, which makes up one quarter of all exports, imported a record volume of lamb for the month of March, and volumes to China, the other major market shareholder of Australian lamb exports, are well above the five-year-average for the year-to-date.

Year-to-date lamb exports to the US were down 13% for the January to March period, but volumes for the month of March were up 10% year-on-year, and increased 13% from February. As we can see from Figure 2, March lamb exports to the US rose to be outside the 70% seasonal range, and March saw the fourth largest total (for any one month) of lamb sent to the US on record. According to the latest Monthly US Lamb Market Update from Steiner, lamb consumption per capita was up 2.6% in 2020. Specifically, per capita consumption of imported lamb in the US has risen 75% since 2010.

China’s market share of Australian lamb is at 23% for the year-to-date, compared to just 17% for the same period in 2020, and the total volume for January to March is marginally ahead of the five year average. March lamb exports to China were down 19% compared to the previous year, however total sheepmeat volume to China, including Mutton, was up 13% year-on-year for the month.

Qatar, Australian lambs equal third-largest export market in 2020, has dipped considerably this year, from 7% of the market share to just 3%. In December, the Qatari government announced they would be scrapping the 50% subsidy on Australian lamb. As we pointed out here, prior to the subsidy being put in place in 2014, Qatar took 4% of Australian lamb, which means the current export share is even lower. In actual volumes, lamb exports to Qatar are down 62% for the first three months of 2021, compared to the same quarter last year. It is important to note however that Australian mutton exports to Qatar are actually up more than 100% for the year-to-date, and March mutton exports were 148% higher year-on-year.

Most of the market share lost from Qatar this year has moved to Papua New Guinea, who currently make up 6% of Australian lamb exports – compared to the 4% it took in 2020. PNG lamb exports are up more than 25% for the first quarter.

Demand for Australian lamb overseas remains strong, with markets seemingly quick to pick up redirected supply. While total lamb exports have still declined more than total lamb slaughter so far this year, Australian mutton is filling supply in some markets, perhaps those looking for a lower-price alternative. 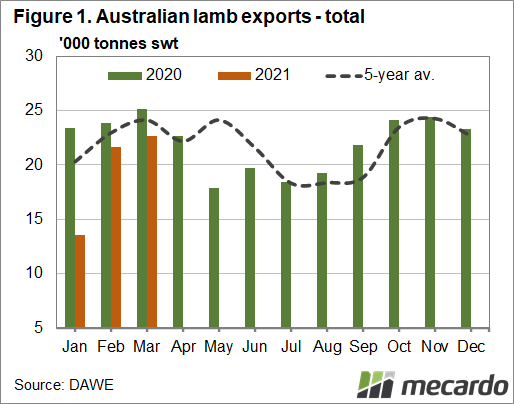