Lamb getting back to business

This weeks’ lamb and sheep market was a positive story amidst the disorder. While a number of processing plants in Victoria closed due to COVID-19 outbreaks or precautions, most now have plans in place to return to full production.

Both lamb and sheep yardings were higher last week but it was sheep numbers that took a bounding leap higher. 40,314 sheep passed through yards on the east coast, a 126% lift on throughput the week prior. This was powered by around an extra 10,000 head yarded each in New South Wales and Victoria compared to the extremely low levels of the week earlier.

Lamb yardings were back up to “more normal” levels, lifting 31% on the week prior. Producers in Victoria remained hesitant with minimal change to throughput, however, growing numbers of early new season lambs in NSW appearing in yards drove the increase.

NSW also picked up the slack for lack of processing in Victoria last week. A 25% drop in lamb slaughter in Victoria (Figure 1) was countered by a 27% increase in NSW (Figure 2), which was also higher than the seasonal five-year average for the first time since April (+17%).

Prices for all categories of lamb saw improvements this week. The Eastern States Trade Lamb Indicator rose 38¢ to 789¢/kg cwt which wasn’t enough to regain last weeks 66¢ loss. Heavy and Merino lambs also saw gains of around 30¢ on the week. Another good splash of rain on the east coast provided Restockers with a boost of confidence. Resotcker lambs were up 94¢ in NSW, and 54 in VIC.

Over in the West, Merino lambs were the only type to make improvements on the week. Heavy lambs were the hardest hit, losing 64¢, while the Western Australian Trade Lamb Indicator dropped 43¢ to 721¢/kg cwt.

The National Mutton Indicator edged lower again this week, falling 9¢ over the week to 574¢/kg cwt on Thursday.

With some Victorian processors set to reopen next week, we should see some more fuel to what has been lacklustre competition in Victoria. These disruptions have been short-lived with processors and industry responding with speed to these health, safety and supply chain challenges which provides some confidence. While we may see supply rebound in Victoria, there is another wet forecast for most of the southern half of Australia in the week. 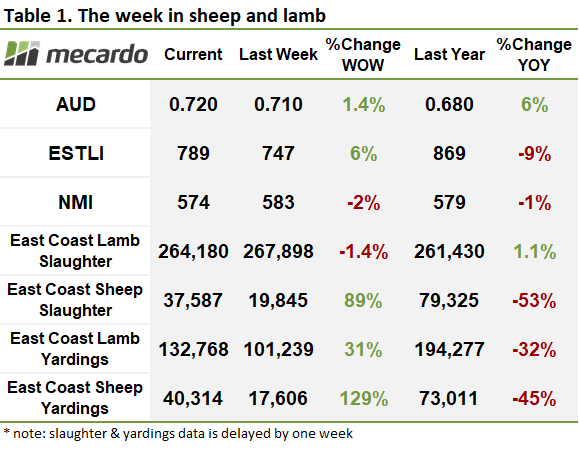