A boost in supply last week wasn’t enough to hold lamb and sheep markets in their place. Prices are on the up, and the Eastern States Trade Lamb Indicator is now back at levels not seen since February.

For the week ending the 25th of June 348,596 lambs were processed in the east. This was a lift of 12% on the week prior, and 10% higher than the five-year seasonal average. Victoria was a major driver of the lift in supply, where an extra 17,556 head were processed. Sheep slaughter also picked back up last week to see 70,740 sheep processed in the east. This was 62% higher than the level seen at the same time last year, but 15% less than the seasonal average.

Processors were busy last week, and so were saleyards. East coast lamb throughput lifted 24% to 180,153 head which was 11% higher than the seasonal average.

Merino lambs were well sought after, which resulted in the National Indicator improving 52ȼ over the week. Interest in restocker lambs generally seems well matched to supply at current prices in NSW and in Victoria with minimal adjustment in price occurring, but in South Australia however, restocker lamb prices fell 59ȼ.

Most lamb and sheep indicators are now sitting higher than they were 12 months ago, that is, all expect the National Restocker Lamb Indicator. The National Heavy Lamb indicator has made the most improvements year-on-year on a ȼ/kg basis, sitting 94ȼ higher at 842ȼ/kg cwt. That’s despite reports from MLA that heavy lambs are dominating yards. On the other end of the weight spectrum are light lambs which are priced just 20ȼ than 12 months ago, and restocker lambs which are 21ȼ lower.

With large areas of NSW set to receive some good rain in the next week, this may encourage lamb supply to tighten back up and prices improve. There is still a chance for further improvements in the ESTLI during July, whether it finds the momentum to push through 900ȼ for the winter peak will depend on how tight supply gets in the weeks ahead. 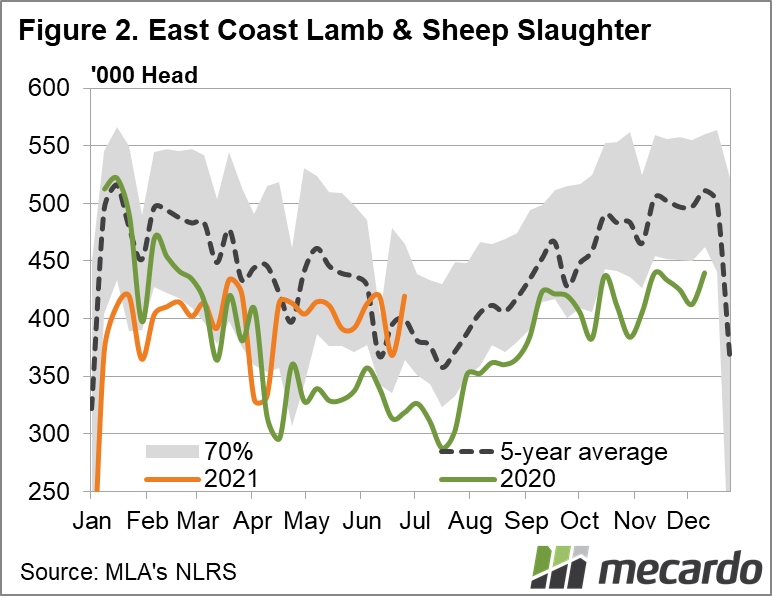