Lamb offtake in the Australian flock – a longer view

Last month Mecardo looked at the relative price levels for wool and lamb, concluding that more non-merino lambs are likely to be produced next year. This article takes a long term look at the key driver of lamb production in Australia.

Price is generally used as a proxy for profit, which is a function of price and productivity. It is not a perfect substitute but prices are generally readily available and easy to work with. Farmers change the allocation of resources in response to changing relative profitability, for which we generally use changing relative price. The longer a change persists for, the greater the likely change in allocation.

A simplistic measure of the profitability of lamb to wool enterprises is a simple ratio of lamb to wool prices. Figure 1 is an example of such a comparison. It shows the price ratio for the saleyard value of a lamb (price by weight) to the clean price for a kilogram of the average merino micron by fiscal year from 1960 to the current season (to date). It shows the price ratio varying between two and six in the four decades to 2000. In November 2017 Mecardo showed how the falling international supply of lamb (despite the efforts of Australian farmers) correlated strongly with the rising price of lamb.

In Figure 2 the series shown in Figure 1 has been smoothed (a rolling three year average) and then lagged by 2 years. Overlaid is the Australian lamb offtake (the number of lambs sold to abattoirs during the season expressed as a proportion of the flock size). The two series correlate nicely, with the lamb offtake following the lead of the lamb to wool price relativities.

Seasonal conditions allowing, it looks as though the supply of lamb flowing to abattoirs will increase during the next couple of years. How that effects price will be largely dependent on international lamb production levels. It points to a slower rebuild of the flock as less young sheep are held back as might be expected, and points to continued constraints on merino wool production. 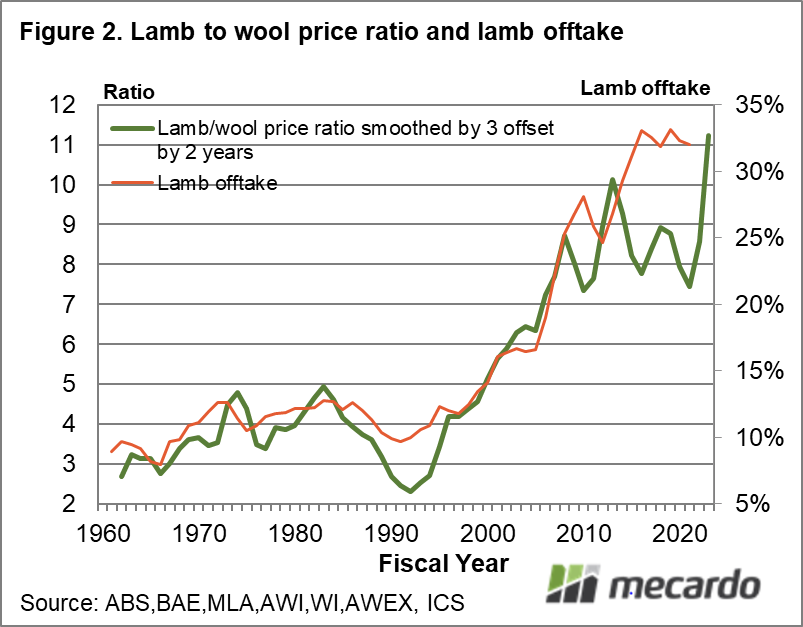