The Australian domestic retail lamb price averaged a record $18.54/kg in 2021, rising year-on-year for the seventh consecutive time. However, the increase was smaller than the previous three years, and well behind the jump experienced in the domestic retail beef price. The average spread between the supermarket and saleyard price for lamb was lower overall last year, at 116% (down from 123%), which means the upside for producer returns have slimmed slightly.

If we have a look at the quarterly figures, which MLA reports from ABS data, the retail lamb price hit a record in the July to September period last year, of $18.59, climbing about 3¢/kg from the previous quarter. However, it lost ¢/kg in the final quarter of 2021, closing at $18.53 – all minimal movements for the consumer. The Eastern States Trade Lamb Indicator saw slightly more significant changes from quarter to quarter, climbing close to 100¢/kg from an 818¢/kg average in quarter two to 916¢/kg in quarter three, and decreasing the gap between the two prices from 127% to 103%  – the smallest spread since the June 2020 quarter.

In terms of annual change, the retail lamb price gained 2% year-on-year in 2021, having climbed 22% in the past five years. Comparatively, the retail beef price rose 10% from 2020 to 2021, but has had the same five-year increase of 22%. In contrast, the retail chicken price actually dropped ever so slightly in 2021 (less than 1%) and has gained less than 6% since 2016. The consumer price for beef averaged 25% more than lamb throughout 2021, up from 18% the previous year. This was the highest annual average spread since 2016.

Total domestic utilisation of lamb fell 2% year-on-year in 2021 according to Meat and Livestock Australia’s estimations in their latest sheep industry forecast, but keeping in mind overall production lost 1%, that figure isn’t too significant.

The price spread from saleyard to supermarket has tightened to a point where there is little indication domestic demand will push producer prices higher, however it does seem to be supporting current historically strong prices. The more rapid rise of beef prices in the short term could also leave more consumers looking for lamb as a more affordable red meat. 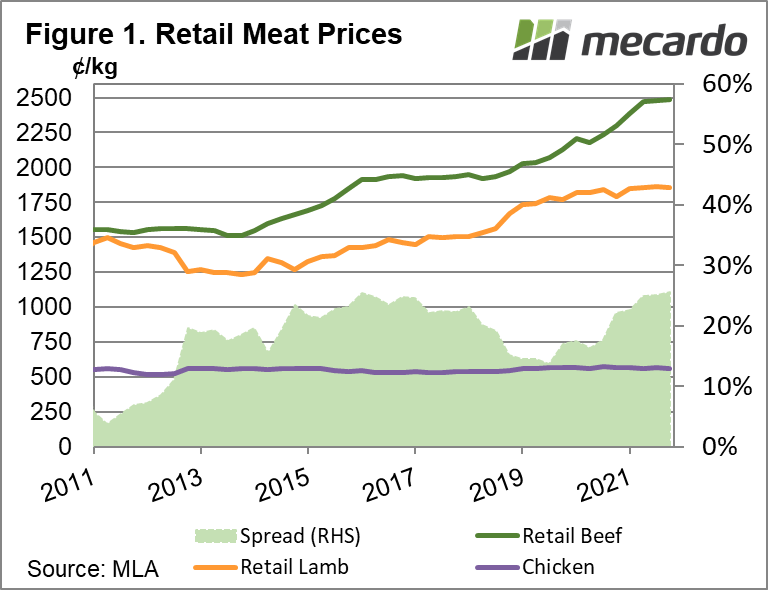