Lamb price steady as she goes

An unseasonal, but not unexpected, crop of summer finished lambs are currently being turned off from parts of NSW where feed was abundant. Now producers are looking forward, prioritising feed for breeding stock as the mornings turn brisk, or getting serious about putting in crops. So, it’s time for lambs to go, with lamb slaughter up 42 per cent year-on-year in NSW for the week ending March 12 (last data available). This extra supply has slowed down prices a bit, but historically the money is still close to $2/kg more than the five-year average. So, what do prices usually do between now and the sucker season?

The Eastern States Trade Lamb Indicator hasn’t exactly followed the historical movements for the 2020/21 season. As we can see from Figure 2, lamb prices in 2019/20 generally followed the five-year average trends. But this year, when historical prices zigged, current prices have zagged. Of course, on top of the usual influences, a change in the weather and the national flock moving from a destocking phase to a rebuilding one, not to mention a global pandemic, has impacted prices over the past 12 months. However, the long-term monthly averages for the ESTLI could offer us some insight into what’s to come.

On a five-year basis, the ESTLI averages much the same for February and March (667¢/kg). But last year’s record high March average (933.28¢/kg) has skewed the figures, with the updated March average actually dropping by 10-15¢/kg from 2016 to 2018, and just holding firm in 2019. According to Meat and Livestock Australia, the March average for the first two weeks of this month is in line with the five-year average, down 11¢/kg.

On five-year average terms, the lamb price rises for the next three months, with the five-year June average nearly 73¢/kg higher than March, the outlier being last year of course, when the price was more than 35¢/kg lower come winter. The other factor of note is the unusual start to the 2020/21 season. Historically, the monthly average ESTLI price loses 76¢/kg from July to December. In 2020, it lost just 7¢/kg – meaning we were coming off a high start point, prior to winter.

Looking at supply, total lamb slaughter is back 5% for the year-to-date – however, last date (week ending March 12) slaughter was up 7% year-on-year on the east coast. Also, a lack of supply hasn’t seemed to dictate the winter price rise in the past two years. In 2020 (when prices dropped from March to June), slaughter for the next 12 weeks was 17% lower than the five-year average, while in 2019 (when prices rose from March to June) slaughter was up nearly 5%.

Even with more lambs on the market in the short term, historical movements, overall limited supply and good export demand should keep lamb prices where they are. However, there is also little indication of the usual upside from now through to winter due to the already strong returns – the best bet would be to budget on the status quo. 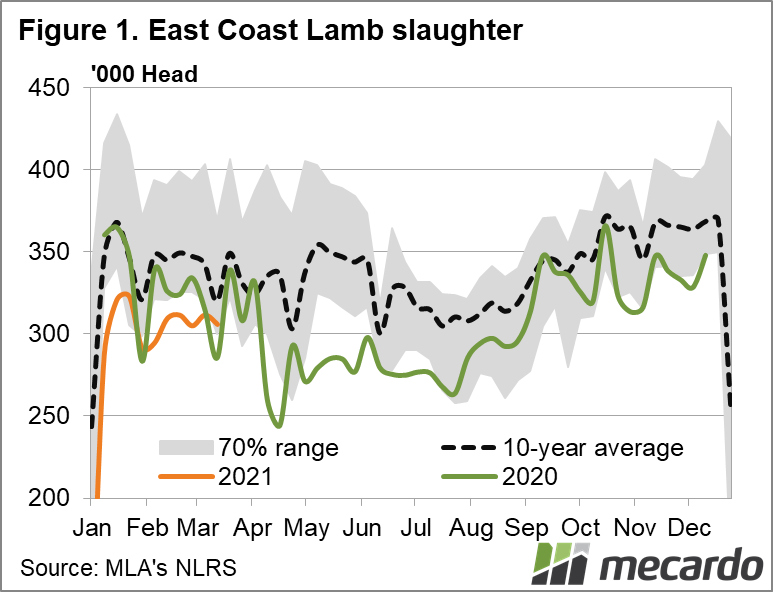