Last week we looked at the robust lamb export markets, and at the moment there are no issues with demand for lamb from offshore. The recent weakening prices are due to local supply and slaughter capacity issues, and this week we look at how long this might continue.

As outlined in last Friday’s comment, the recent lift in lamb slaughter rates is positive for lamb producers, as it at least means the stronger supply hitting the market is finding a home.  There has been much conjecture as to how lamb supply might play out from here, with flock numbers and anecdotal evidence suggesting strong supplies might continue.

Figure 1 shows east coast lamb slaughter reaching a peak of 341,617 in the first week of March.  It also shows that to hit Meat and Livestock Australia’s (MLA) forecast, which is a 4% increase on 2021, slaughter rates will have to average around 336,600 per week for the rest of the year.

Obviously there will be some variation in slaughter rates, with winter kill likely to be lower, and spring and early summer higher, but it does look like there will be plenty of lambs to work through over the next 2 to 3 months.

For sheep, the first two and a half months of slaughter have been well off target.  It looks like slaughter rates will either have to have a sustained increase, or there will be much less mutton produced than expected.  Figure 2 shows that to hit the 18% increase in sheep slaughter forecast by MLA, weekly east coast slaughter will have to average 106,000, a level we haven’t seen since the spring.

To get an idea of slaughter capacity, we need to look at lamb and sheep numbers together, as they are processed on the same chains.  Figure 3 shows east coast lamb and sheep slaughter, with the good news being that two weeks ago total slaughter was high enough to handle the target numbers.

The issue with sheep and lamb slaughter having to run at the most recent capacity limit, is that any marked increase in supply will see prices fall.  This looks like what we have seen in the last couple of week, especially in the lamb market.

With export demand still good, there is likely incentive for processors to increase kill rates, but there remain issues finding labour to do this.  The short term direction of the market looks to be sideways, and the winter price rise might take longer to appear this year.  Producers would want to hope some labour has turned up by the spring, or we might see a sharp price fall when those supplies arrive. 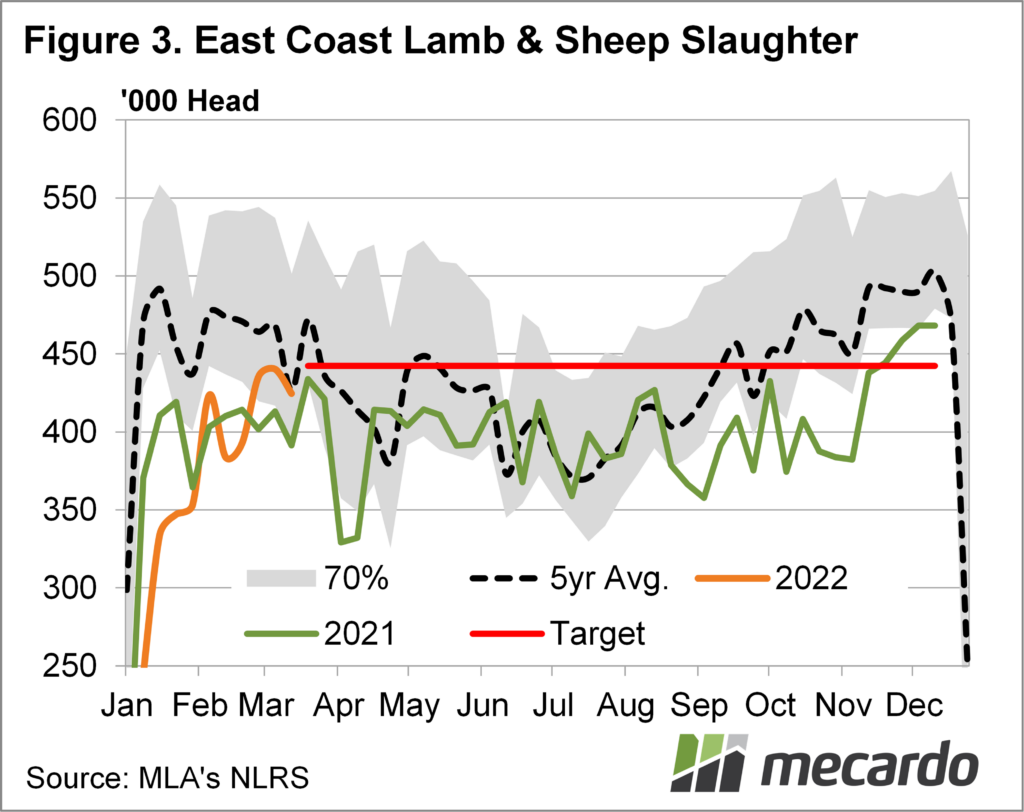