It’s not unusual for lamb slaughter to remain strong into June. Late May and the first week of June have historically seen weekly slaughter rates at average levels for the year to date. The average lamb slaughter rate usually falls with the Queens Birthday holiday and stays low. This year, supply just continues coming.

Figure 1 shows that national lamb slaughter actually hit its annual highs in the week ending the 3rd of June, and didn’t fall much in the second week.  The public holiday did hit slaughter rates, but it’s worth taking a look at early June slaughter rates.

Lamb slaughter has been higher for the equivalent weeks in the past. In 2018 lamb slaughter was 5.5% higher, while it was at similar levels in 2013 and 2014.  In no other year has June marked the high water mark for lamb supply for the first half of the year.

All the way back in February we were looking at low slaughter rates and wondering if it would extend the old lamb season.  It seems it has, with weekly slaughter higher in May and June than the first four months.

The recent lift has lamb slaughter for the year to date now within 0.4% of 2021 levels.  After the slow start, May and June slaughter has been 5% stronger than 2021.

What we can also see in figure 1 is that lamb slaughter usually declines rapidly in June.  After the Queens Birthday holiday, it rarely recovers.  Tight supply usually makes mid-winter a good time for maintenance shutdowns, but there has been at least one year when slaughter has remained relatively strong all winter.

It’s no coincidence that it was in 2011, after the last wet La Nina summer, and we can see in figure 1 that while slaughter was volatile in July and August, it was stronger than in March and April.

In 2011, prices fell from autumn into winter (figure 2), which was unusual, and then basically tracked sideways for the rest of the year.  There was no winter rally, but also no spring decline, but that was more a function of good spring rain that year.

Those looking for a winter rally to sell new season lambs won’t like the look of the 2011 price trend.  However, it’s also unlikely we’ll see the late winter decline we saw in 2020, which is good news.

There is still time for old season supplies to tighten and drive a rally, but it might be limited in strength and short-lived.  Much more so than last year. 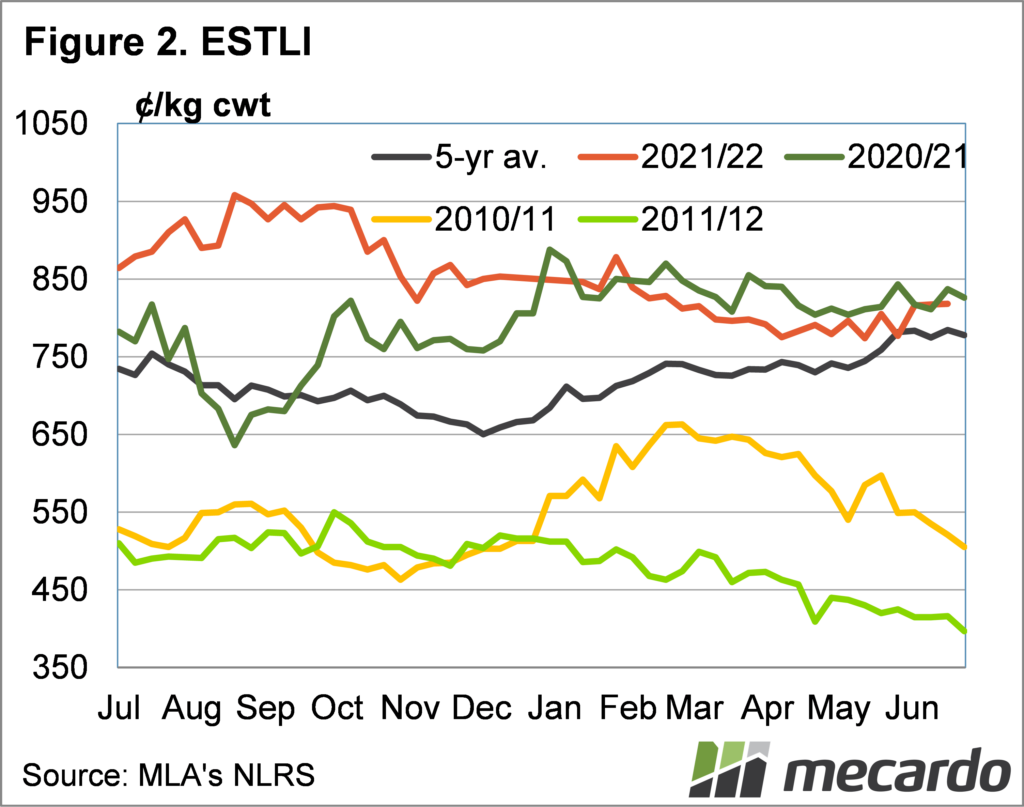