Lamb supplies on road to recovery

As we move through the depths of winter and tight ovine supply, attention is turning to the spring and summer. With winter lambs hitting the ground now, and many of the new season supply coming in the next two months, we take a look at what we might see in terms of lamb and sheep supply for the rest of the year.

Meat & Livestock Australia’s (MLA) industry projections put some figures around total sheep and lamb supply for 2020, and it obviously takes into account what has been slaughtered already.  As such we deduct slaughter to date to give us a rough idea of what MLA think is to come for the rest of the year.

Based on MLA’s weekly slaughter statistics, it looks like May lamb slaughter will be higher than April, but much lower than last year. Lamb slaughter in the first 2 weeks of June has also been lower, and it looks like we might be headed for the tightest slaughter month since at least 2005.

If we take what has been processed to date, and deduct from the latest forecast of 20.6 million head, the supply in the second half of the year looks like figure 1.  If it comes to fruition, lamb supply from July to December will actually be 3% stronger than in 2019.

Figure 1 also shows how the 2021 forecast will pan out with average seasonality.  With a return to more normal seasons, we should see similar slaughter to this year in the first quarter, and stronger levels for the remainder of the year.

There is no such increase on the horizon for sheep supplies.  The second half of 2020 is expected to see slaughter rates 35% lower than in 2019.  Sheep supply is expected to increase in the spring, but it will still be well off the strong levels seen last year.

The forecast for 2021 sheep slaughter is the same as in 2020, at 6.5 million head. Figure 2 shows that normal seasonality will see 2021 slaughter track at similar levels to this year.

We have noted before that we are currently seeing the low for lamb supply, with year on year increases expected from here. It will be up to demand to drive lamb prices in the spring. Supply will be historically low, but it is hard to see demand matching the levels of last year, and therefore it’s hard to see prices matching either.

Tight sheep supply might save lamb prices. The sheep supply dearth will leave some more space for lamb, if export demand is there to soak them up. 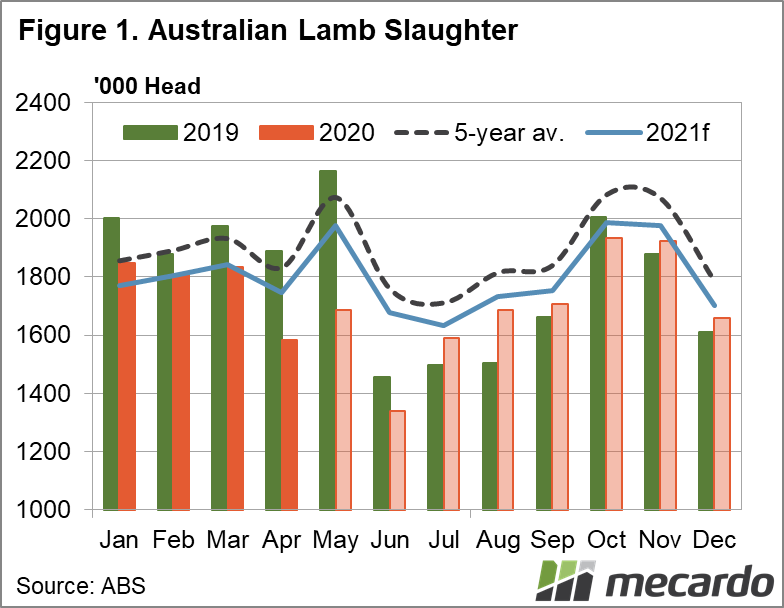