2020 has delivered brilliant seasonal conditions for lamb producers across the country, with the break of the drought and consistent rainfall resulting on excellent feed production in the paddock. This is allowing lambs to be grown to high weights on pasture at comparatively low cost. We’re now seeing average carcase weights at slaughter reaching unprecedentedly high levels.

For the first six months of 2020, the average carcase weight of an Australian lamb was 24.83Kg (figure 1); which was an unprecedented 1.8kg, or 8% higher than the five-year average of 23Kg for the period. At its peak in March, average weights reached a whopping 25.7kg. Looking back over the last 20 years average lamb carcase weights have risen from around 20kg back in the early 2000’s to the 22-23kg mark over the last 5 years. National average monthly weights over 24kg are extraordinary, let alone figures approaching 26kg like earlier this year.

NSW has driven the trend towards progressively heavier slaughter weights. NSW lambs averaged 27kg for the first half of 2020, peaking at 29kg in February. SA is also on the heavier side, but the bigger producing states of VIC and WA are typically a couple of kilos lighter (figure 2).

The last time a significant step-change in carcase weights occurred was in 2010, when average weights lifted from sub 21kg to 22Kg+. In 2016, the light lamb carcase trade emerged, which put a dampener on the growth trajectory of weights.

Given the timing of slaughter in early 2020, we can presume that these high weights were driven by producers pushing residual lambs from the 2019 spring drop to export weights. The seasonal fall in carcase weights is still to come, (figure 1) producing a very conservative forecast of around 24kg for the remaining months of 2020. However; this is not a normal year, and a much heavier finish to 2020 is well within the realms of possibility.

Heavier lambs mean more meat from the same number of head. Expected slaughter for the rest of the year will range between 1.7-2.1 million head per month, meaning that for every extra kilo in average carcase weight achieved will require about an additional 2Kt of product to be shifted per month. This is equivalent to around 35% of our average exports to key destinations of the US or the Middle East which typically only take 5-6Kt a month each.

With average export prices tracking at levels higher than last year, and demand  weakened due to economic headwinds, export prices may need adjusting to soak up the extra volumes.

To illustrate, we used MLA’s slaughter forecast of 20.3 million head, and overlaid a scenario of 25kg average carcase weights till the end of the year to see what production might look like (figure 3). 4kt more than 2019 is a lot of extra lamb. Finding an outlet at current prices may be difficult when Chinese demand is showing relative weakness, and with further economic stimulus in the US delayed until after the November elections, the US too is looking shaky.

Average lamb carcase weights have been rising for over 20 years, but 2020 has seen a sudden jump as producers take advantage of the good conditions and finish lambs to maximise profits. If the tail end of 2020 continues to see lambs turned off at elevated weights, this may boost lamb meat production to levels that could put downward pressure on export prices. 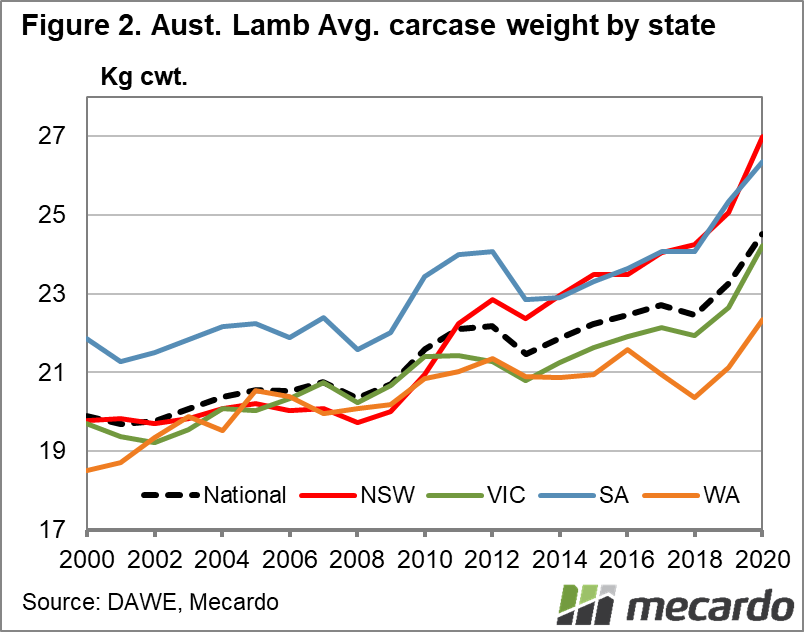