In case you missed it, new restrictions to metropolitan Melbourne were brought in at the end of August and are still in place which directly impact processors in the area. Those restrictions are ‘an abattoir or meat processing facility must reduce the daily peak workforce capacity, and the daily total workforce capacity, by 20% or 25 workers, whichever is higher’. According to Meat & Livestock Australia, the number of regional abattoirs who have boning rooms in Melbourne means half of all processors in Victoria are impacted.

With lower yardings showing a supply slowdown in the past couple of weeks – not uncommon in the past two years – it may not be until the December quarter ABS slaughter figures are released that we can really get a clear picture of the Covid-19 impact on sheep and lamb slaughter this year. However weekly MLA/NRLS slaughter reports can offer some insight, and compared to last year there appears to be little impact so far. Weekly lamb slaughter in Victoria has been tracking higher year-on-year since May – until the past two weeks. However Victorian lamb slaughter since the restrictions were introduced in late August has fallen less than 1% compared to 2020. For the same time period, it is back more than 7% on the five-year-average, but given flock numbers hit their lowest level on record last year, it wasn’t unexpected.

We looked at total lamb slaughter so far this year here at about the same time as these new restrictions came into place, which showed ABS figures had 2.5% more lambs processed in the first half of the year compared to 2020. In June, MLA’s projections expected lamb slaughter to only rise 1.5% for the entire 2021 (year-on-year) – which if accurate, would mean less lambs are left to be slaughtered in the June-December period compared to last year. However total lamb yardings for August were up 30% (despite new season lamb slaughter volumes being down 20% ) which could mean a lot more 2020-drop lambs were left in the system than first predicted.

This, teamed with the spring flush yet to hit the market in Victoria, might mean the pain is yet to come. According to MLA’s latest modelling, lamb numbers in Victoria will be about 5 million head this year – 455,000 more than the five-year-average. They have predicted that in the worst case scenario, with processing cut back across the whole state until the end of spring, there would be 645,000 less lambs slaughtered. Even if NSW steps up production like it did last year when Victoria was Covid-impacted (and industry reports they are facing their own capacity and labour issues), this could still leave an excess one million lambs in the system, according to MLA. But if it is metro-only, that number would be more like 350,000.

While the worst-case-scenarios sound dire, the consistency of the lamb industry in recent years would suggest it is well-placed to face them. If extra price pressure is applied (on top of the usual spring downturn), it will be applied to prices currently trading in record territory. And with rain continuing to fall for many sheep producing regions, the ability to hold onto lambs until processing capacity opens up could be more than usual. That said, an extra 350,000 lambs is still a lot of lambs left without a kill floor, and pain will have to be felt at both ends of the supply chain if it eventuates. 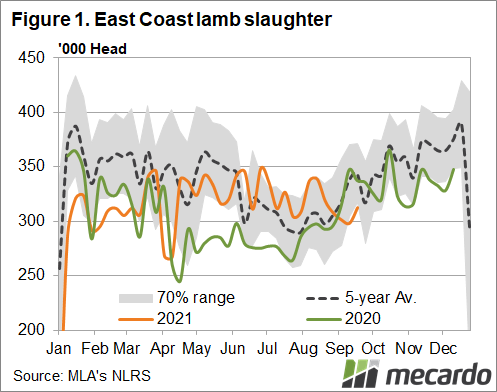 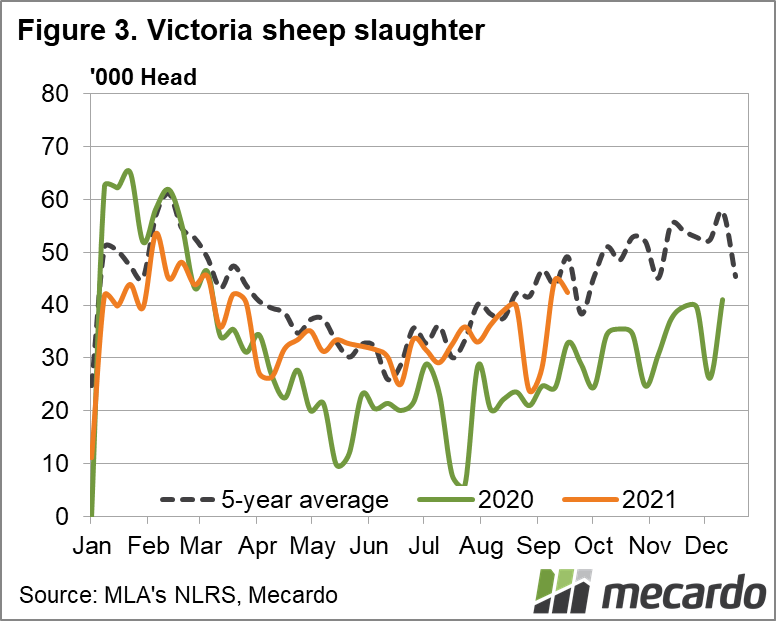