Lamb slaughter has started to pick up, and heavy lamb prices have headed south as we move into the autumn. While they have been in no way record-breaking, processing throughput figures have started to move higher over the past month, signifying there’s plenty of lambs out there ready for slaughter and that capacity has returned to the industry. And it is expected this flow will now continue, causing prices to follow last year’s trend of lowering until winter.

Currently trade and heavy lambs are sitting close to on-par with year-ago levels, with the national trade price of 796¢/kg down by 5¢/kg, and the national heavy lamb price sitting equal at 774¢/kg. The Eastern States Trade Lamb Indicator at 795¢/kg this week is 13¢ lower than 12 months ago. We can see from the first two charts that trade and heavy prices have been tracking lower year-on-year for the past few weeks, after having spent most of the second half of 2021 higher. They do however remain well above the five-year average range.

The National Trade Lamb Indicator is averaging 809¢/kg for the month of March so far, compared to 818¢/kg last year. This price dipped by about 10¢/kg in April and May 2021, before rising back to the March level in June. Current trading conditions indicate this pattern is on the cards for this year too, with little upside available as slaughter builds, but strong restocker and export market support keeping too much downside out of the equation.

Eastern states weekly lamb slaughter climbed above the five and 10-year averages for the first time this year last week, reaching close to 329,000 head. While it was lower compared to the previous week, it was the third consecutive week lamb slaughter was higher year-on-year (see figure 3). But there is still plenty of room for increase if the Meat and Livestock Australia industry projection of a 4% rise in lamb slaughter this year is anything to go by. For the year-to-date (latest data March 11) the east coast lamb kill is down nearly 7% compared to the same period last year, and 14% less than the five-year average.

Slaughter supply is not expected to slip away too quickly through the autumn, as we make up for a bit of ground lost to Covid-19 impacts on processors early in the year, and plenty of rain kept summer crops available for lambs in many areas. The average weekly lamb slaughter figure for the year so far is the lowest it’s been since 2011, and if estimated flock growth and expectations of increased production this year are accurate, that will have to pick up soon. This will likely restrict lamb prices through the autumn until a true winter supply glut arrives. 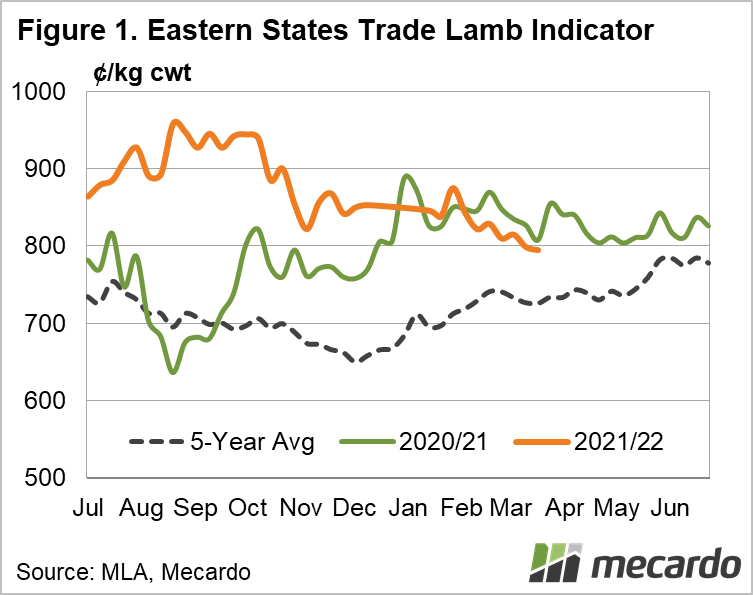 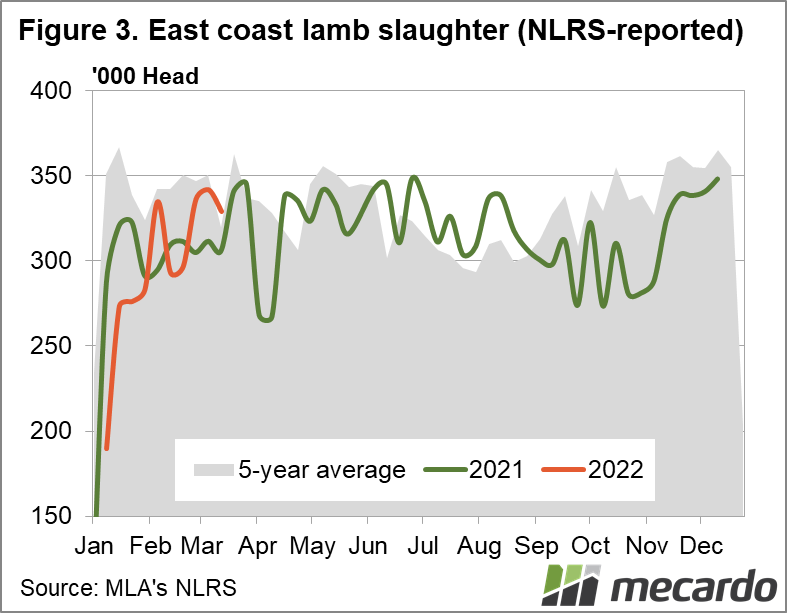