Ongoing flood disruptions up north and some drier weather in some parts of the south saw demand generally soften this week, with less cattle on offer according to Meat & Livestock Australia’s market report which commented ‘yardings were down in Roma and Dalby in light of recent weather events’.

Official east coast yardings are delayed a week of course, so we actually saw a 23% lift in yardings numbers for the week ending 25th March 2022, with 47,594 head of cattle yarded compared to 41,000 the week prior. Qld offerings were 31% higher and there was an 84% increase in VIC, co-incidentally yardings figures last week were around 83% higher than the same time last year. NSW numbers dropped slightly, down 2.3%.

Slaughter figures were up last week on the previous week also, with a 10% lift,  95,690 head of cattle processed on the east coast for the week ending 25th March 2022.

There were plenty of cattle coming to the market last week via AuctionsPlus also, with their market comments saying it was their largest offering in almost two years, at nearly 25,000 head. AuctionsPlus reported while demand was robust, there was some weakend demand for some of the lighter lines of cattle, while Feeders 400kg + were highly sought after.

The Eastern Young Cattle Indicator fell substantially this week, which as mentioned by MLA in their market comment, could be an indication of easing restocker demand with Feeders now make up “60% of buyers for EYCI-eligible cattle.”

The Western Young Cattle Indicator (WYCI) took the spotlight this week briefly, climbing to its highest since November last year, at 1172¢/kg cwt. The WYCI has since fallen down to where it sits currently at 1127¢/kg cwt, still at 45¢ or 4% premium to its eastern counterpart. (Figure 1) Yardings were well down last week WA however, compared to the week prior with just 655 head the rolling 7 day average there.

The national categories were generally weaker with all cattle types losing ground, bar the Processor yearling steers which lifted by 15¢ to 573¢/kg lwt. The worst affected indicators were the Medium steer this week, which shed 25¢(4%) to close the week at 442¢/kg lwt. Cow prices continued their decline from highs achieved at the start of the month, losing 9¢(2.5%) this week to close at 341¢/kg lwt.

The US frozen cow 90CL price fell to its lowest level since January this year, down 40¢  or 4.5% to 885¢/kg swt  or 300¢US/lb. The Aussie dollar also weakend this week down 0.3% to 0.749 US. With the US taking on a lot more Brazalian beef, especially boneless beef trim, up 25% on year ago levels according the US Stiener report last week, there’s still plenty of demand for Aussie beef especially from China and other Asian nations. And if, as MLA reported yesterday, that shipping congestion/supply issues should ease towards the tail-end of 2022, this will only improve demand for over Aussie red meat overseas, as it potentially reduces the overall cost for buyers looking for more of our product.

Expect to see lower yardings next week as flooding continues to disrupt supply lines, particularly up north. With low numbers on offer this week, we may see demand pick up next week, assuming supply disruptions are fixed or at least improved. 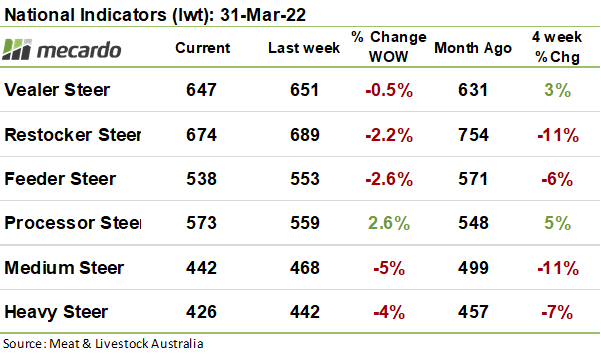 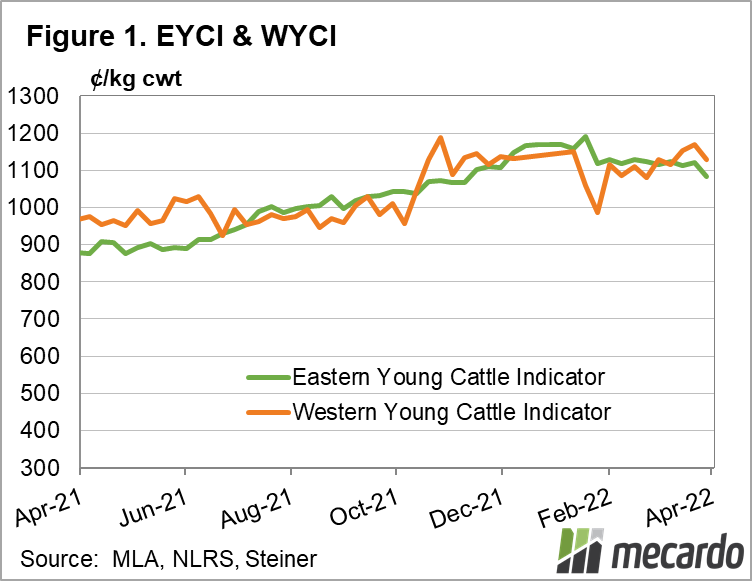