We’re at the annual recess for the 2021/22 season and despite some promising signs on the final day of sales in Melbourne, most indicators were down, including the EMI which fell for the 3rd straight week.

Although there were falls across the board for most indicators on the first two days of sales, by Thursday there was some renewed momentum in the market at the Melbourne sale with all indicators making solid increases (or at least didn’t fall). AWEX commented that the main buyer support was for “good style higher yielding types” with plenty of solid premiums for speciality non-mulesed types, again according to AWEX a line of 20.2 micron(NM/CM) wool sold for 1,774 cents, while specialised mulesed lots were selling at 1430.

Although there were some big losses recorded for many wool types, the finer indicators in Melbourne finished the week higher than last, with the 16.5 & 17MPG lifting 37 & 48ȼ respectively.   All other indicators fell across the states, between 6 to 51 cents.

The Western Market Indicator is down 13ȼ  on last week to 1473ȼ/kg.

Crossbreds dropped marginally, while cardings lifted in Melbourne but fell in the other selling centres.  The cardings indicator in Melbourne crept up 3 cents on last week to 903ȼ/kg.

This week on Mecardo Andrew Woods took a look at recent patterns in micron supply revealing some interesting trends when comparing the east coast of Australia to WA.  He also took a look at the seasonal influences on wool quality and how supply can influence premiums for better ‘quality’ wool.

There’s a three week break from sales now until the 8th of August as the wool market takes a breather, congratulations to everyone involved in the wool sales process from producers to wool auction facility managers & employees for making it through another season, full of surprises. Taking a quick look around the corner, the EMI has fallen post winter recess three out of the last five years ranging between 56 to 128 cents lower.  In the years where it has lifted, it’s been a more modest 9 to 28 cents. (figure 4) 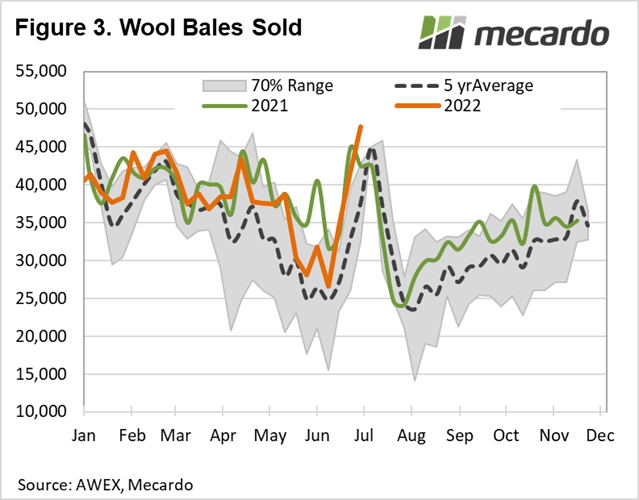