Earlier this month, Pulse Australia and Austrade co-hosted a webinar with the Indian Pulse and Grain Association (IPGA) aimed at understanding supply and demand issues. This article takes a look at the global pulse market and potential impacts for Australia.

Participants heard the share of Australian lentils in India’s import requirement had been 10-15% over the past 7-8 years (and ~80-90% of chickpeas’) until December 2017.   The 60% import duty imposed by the Indian Government saw imports from Australia drop to almost zero.

Despite some good monsoons and abundant crops, India’s pulse production had been compromised in 2020 by late rains and COVID-19 outbreaks which forced workers into lockdown and left crops in the fields.

This year, Indian Government estimates around 1.35mmt of lentil production, but trade estimates between 900kmt to 1.0mmt.  Chuck Penner from Left Field Commodity Research (@leftfieldCR) notes that the Indian Gov’t has called a record pulse production of 25.6mmt –  but price behaviour would suggest otherwise.  Currently, all pulses in India are trading above minimum support price and reports are that government stocks have hit a low.

The total consumption of lentils in India is approximately 1.8 – 2.0mmt per year, which translates to roughly 150 – 170kmt every month.  To avoid food inflation and starvation, it appears that India will again be a key importer of lentils.

From an Australian perspective, a major chunk of Australia’s 700kmt (note ABARES at 634 kmt vs industry at 800kmt) produced last year has already been exported.  Forecasts for 21/22 anticipates lower production compared to last year.

Assuming steady to slightly higher acreage planted, but with a reversion back to average yields, the 2021/22 crop should achieve ~500kmt.

Based on recent years, Bangladesh is a consistent buyer with demand exceeding 250kmt.  Sri Lankan demand has increased to over 100kmt.  The balance will be exported to Egypt, Pakistan and the UAE.

If Australia produces a ~500kmt lentil crop in 2021/22, it should be relatively easy to export, even with limited demand from India.  If the Indian Government reduces or removes import duties to resume imports, this will place pressure on relatively tight Australian supplies, which will obviously be good for prices. 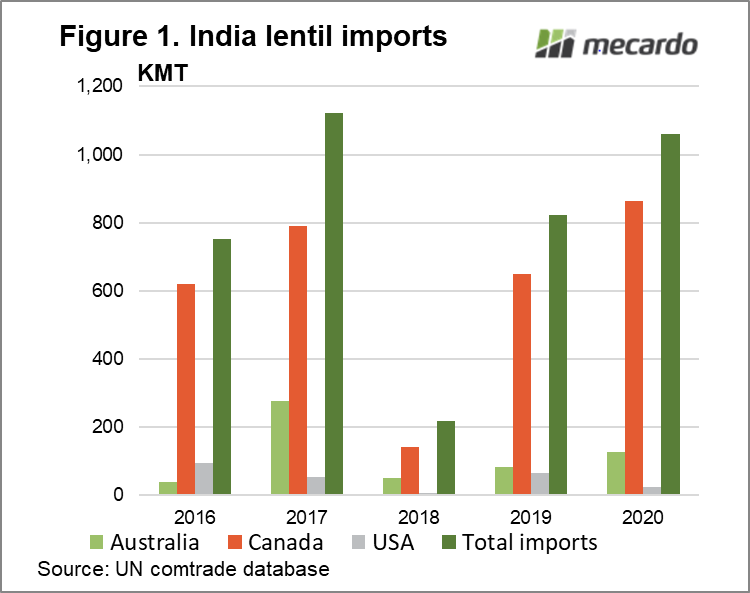 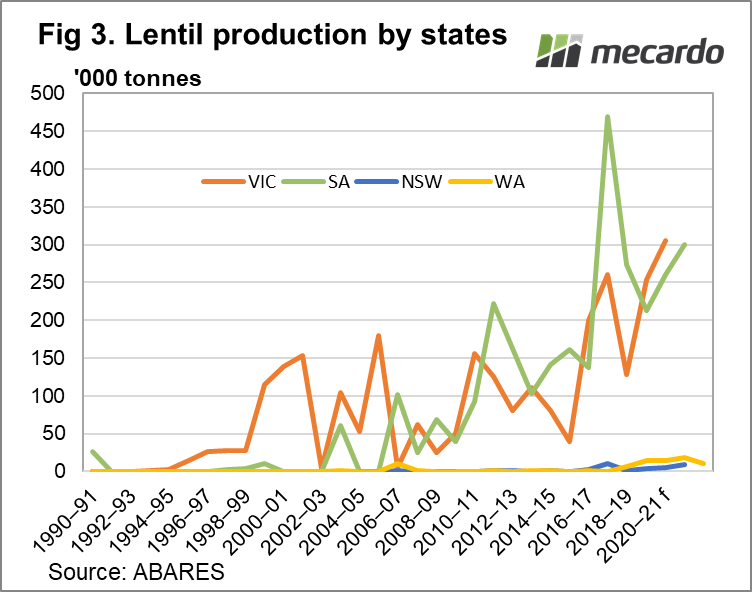