Little Aussie battler – How high can it go?

The Aussie Dollar has surged in the past couple of months, climbing off the deck at around 0.74 to now be knocking on the door of 0.80 USD. For those who don’t follow currency changes, a higher AUD makes the price of exportable commodities more expensive i.e. importers pay more for our products as the AUD rises.

As wheat is traded in USD and more specifically in US¢/bu (the denomination of CBOT futures), when we convert the price of wheat into AUD terms, a rising AUD means we get paid less per tonne.

So why is the AUD doing what its doing?

Firstly you have to understand that every currency is cross referenced against the US greenback.  Consider it like a seesaw, with the USD at one end and a basket of currencies (including the AUD, Yen, Euro, Remnimbi, Franc etc).  When the USD is high, the other currencies are generally low and vice versa.

The USD has been weakening in the past 6 months as the state of the US economy deteriorated.  The US was printing money which devalued the dollar and the country was in the grip of the COVID pandemic.

Today, the US is still struggling with unemployment and despite vaccination programs being rolled out, can’t seem to shake the lingering effects of the virus.

On the other hand, countries like Australia have managed to contain the virus and are showing greater economic resilience.

The AUD is also a good indicator of the Chinese economy.  As we know, Australia has some of the largest deposits of uranium, iron and minerals in the world, and we also know China has an almost unlimited appetite for Australia’s raw commodities.  Trade relations aside, the AUD is inextricably linked to the fortunes of the Chinese economy which appears to be rebounding strongly.

In the past five years, the AUD has approached 0.81USD three times only to fall back when the Chinese economy has suffered a setback.  The first was the spread of the Avian Flu that jumped from birds to humans.  The second was the start of the Trump era trade wars that sent shockwaves through the Chinese economy. Most recently, the COVID pandemic set the worlds economies into a slump not seen since WW2.

So what will stop the AUD on its upward trajectory?  An improvement in US/China relations won’t do it.  There is a thought that the Biden Administration will take a more moderate approach towards China.  The push towards green energy won’t do it either.  China is currently constructing 16 nuclear power plants with a further 168 proposed and will likely rely heavily on Australian uranium.  Similarly, the rise of electric vehicles and battery storage will keep a bid under mineral prices, such as copper, nickel and cobalt – all readily sourced from Australia.

Of course, there will be variations to the above outlook.  Currencies are influenced by a wide array of economic, political and social shifts.  A rebound in the US economy or further weakening of Aust/Chinese trade relations could derail the AUD move higher.  Similarly, if Australia can reduce its reliance on China by reworking trade routes into other origins, the  AUD may decouple. At a recent teleconference, a NAB currency analyst supported a peak of 0.83USD by Dec ’21 based on the projected timeframe before the US economy starts to turn around.

On the balance of evidence, it appears that the AUD is on the up with little to get in its way.  Time will tell. 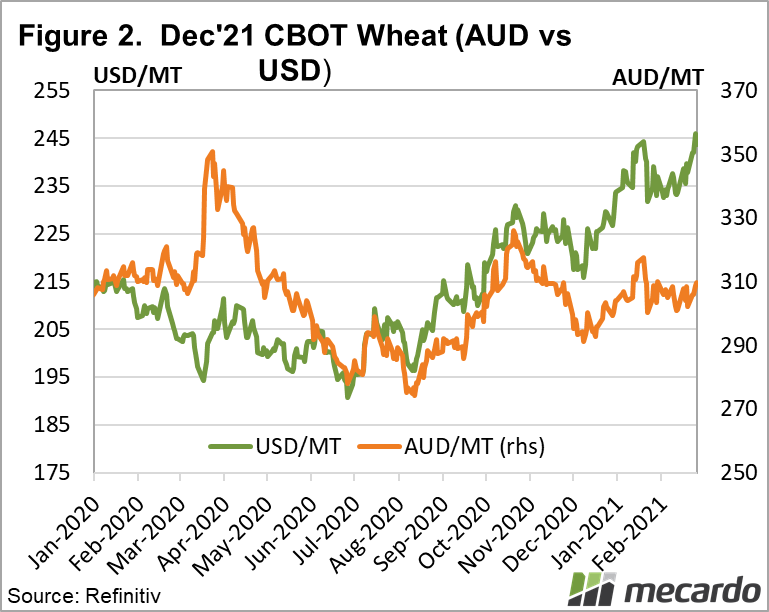