The first two months of data on live sheep exports following the northern hemisphere summer shutdown is in, and numbers remain historically low for the year-to-date. This is despite a significant year-on-year surge for the month of October, with numbers lifting 1245%. Subdued supply and record prices remain key factors in all export markets, however the moratorium on live sheep heading offshore for three months of the year is also playing a role year-round.

Total live sheep exports to October have dropped 22% year-on-year, to the lowest levels in 20 years. Kuwait and the UAE have picked up significant market share, but no sheep have been exported to Qatar so far in 2021, due to a removal of a subsidy on Australian sheepmeat. In comparison, Australia sent 180,000 live sheep to Qatar in 2020, making up about 28% of the total live export market. Kuwait has gone from making up about 41% of the Australian live sheep market last year to close to 70% this year, with numbers up 11% for 2021 so far. The UAE has also increased their market share by nearly 10%, taking 44% more sheep for the year-to-October compared to 2020.

Meat and Livestock Australia’s latest sheep outlook (October), projected sheep exports would drop 20% for the year, before rebounding slightly in 2022, but would still remaining 12% below 2020 levels by 2023. Projected live sheep exports for this year have lifted since the previous outlook, released in June,  as have the forecasts for the following two years, with MLA putting this down to a faster than expected sheep flock rebuild and potential reopening of the Saudi Arabian market. Australia hasn’t had access to the Saudi Arabia live sheep market since 2012 due to the Exporter Supply Chain Assurance System implementation, but has begun the process of opening up again this year (however no sheep have been sent so far).

The mass exodus of sheep domestically from west to east has slowed considerably since July, but remained at record levels for the first half of this year – another aspect contributing to lower international live exports. For the year to October, sheep numbers out of the Fremantle and Perth ports have dropped 22% and 43% year-on-year. That said, despite rises of 85% and 162% in Sydney and Melbourne respectively, live sheep exports out of Western Australia still made up close to 98% of the market.

A stronger October, potential in the Saudi Arabia market and a rapidly rebuilding flock have all slightly increased confidence in our live sheep market as we approach the end of the year, and economic and consumption recovery from Covid-19 next year should further support it. However, the market has been heading downwards in numbers since 2014, and with the annual three-month ban on live sheep exports, is unlikely to rise back up in any significant way, as those countries which have had to seek sheep supply elsewhere during their summer months are looking to those alternative markets year-round. 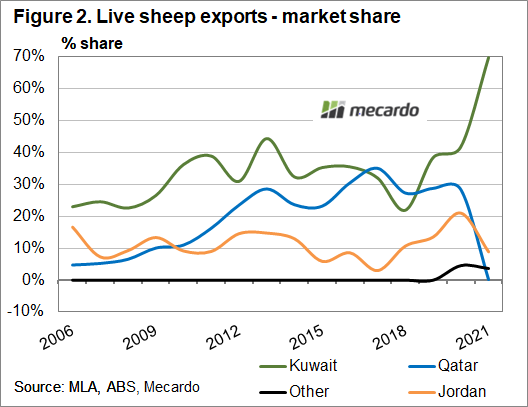