The Middle Eastern summer live sheep export prohibition period has now kicked in, and will remain in place until mid-September. With total sheep exports dropping 17 per cent year-on-year so far, Australia’s end of year tally could be significantly lower at the close of 2020.

Despite a surge of live sheep exports in March, volumes for April and May remained below year-ago levels, and resulted in 287,885 head being exported – the lowest recorded second quarter total since 1989 (when published results became available). This has had little impact on the results for the financial year, with total exports for the 12-months ending June down just 1% year-on-year, but does not bode well for the calendar year tally, with no sheep headed off-shore for most of the third quarter.

Looking at our specific trading markets, Kuwait is now the largest for live sheep, and volumes for both the April-June quarter, and the past financial year, were higher year-on-year. In fact, they jumped 15% for the 12-months to June, with a shipment sneaking through in June helping this along. Also receiving higher volumes in the second quarter was Jordan, another market that was up 15% for the financial year.

Rounding out the top three is Qatar, leading the race in terms of volume for the first quarter of 2020, taking 34% of all live sheep leaving Australian shores. It fell dramatically in the second quarter however, with the year to June total dipping 29%.

The slow-down in the food service industry has had obvious repercussions for Australian exports into the Middle East, but it is not the only way COVID-19 has impacted trade.

Exports for the April-June quarter did not lift as the industry may have been hoping for in the lead up to the stall in trade for the Middle Eastern summer, and the export volumes achieved were predominately supported by falling chilled carcass exports because of COVID-19 travel restrictions.

With year to June live sheep export volumes sitting at just above 580,000, the lowest figure on record, teamed with the current moratorium on trade, it is more than likely Australia’s trading partners in this market will start looking elsewhere to ensure supply. And with Australian livestock prices some of the highest in the world, coupled with the lowest Australian flock in 100 years, the risk is they won’t look back when the boats start again in September. 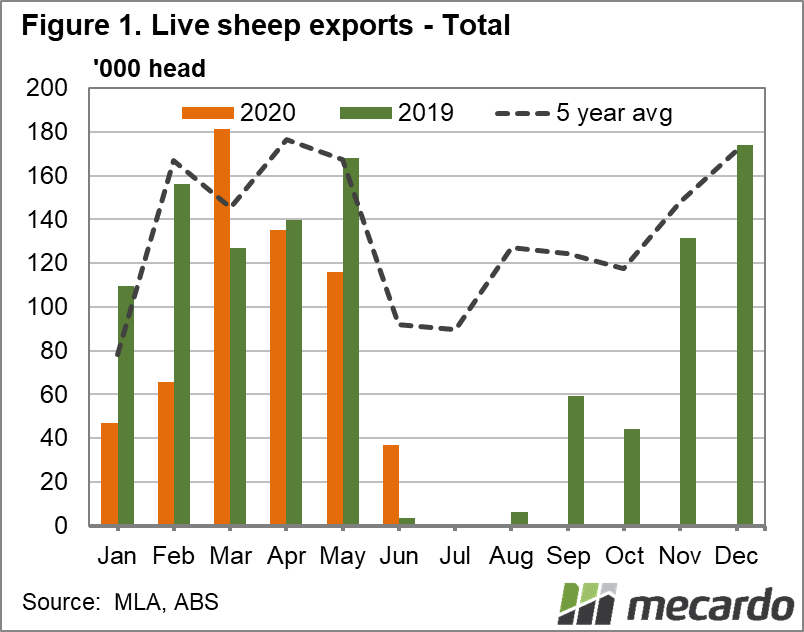