Sheep live export numbers have continued to fall away in 2022, despite promising volumes at the beginning of year. Last year’s total figure was the lowest in more than 30 years, and if current industry forecasts come to fruition, this year’s final tally will be even lower.

Australia’s sustained strong sheep prices and low flock numbers, the stall on exporting during our key market’s summer months, and no doubt the confirmation that if Labour remain in power the industry will be banned altogether, have taken a toll on the live export trade, which has gone from exporting more than 4 million sheep in 2008 to less than half a million last year.

If we look at this year’s figures so far, January and February numbers were stronger than the previous two years, despite still being below the five year average. April volumes were also higher year-on-year, but again only about half of the average for the previous five years. March, on the other hand, was 93% down on the same month in 2021, and total numbers for the first six months of 2022 are down 25% year on year. The average number of sheep sent overseas for that period over the past five years is about 670,000, with this year’s figure sitting at a touch over 280,000 head.

As we can see in figure 3, Kuwait has emerged as the dominant destination with the highest market share in the past three years – ever since the moratorium on Australian sheep being sent to the Middle East for the Northern Hemisphere summer means the live sheep trade essentially stops from June to September (a total of 46 sheep were live exported from Australia in June). So far this year Kuwait has taken 65% of Australia’s live sheep, after making up nearly 70% of the trade in 2021. The United Arab Emirates held 20% of the market share in 2021, but that figure has fallen to 12% year to date. Jordan has gone from 10% last year to importing no Australian sheep this year, while live exports to Qatar remain stalled altogether since 2020.

Meat and Livestock Australia’s latest sheep industry projections have revised the total live export forecast for 2022 down by 100,000 head or 20%, to 500,000. They do, however, expect figures to lift again in 2023 to 650,000, with opportunities arising from growing demand in Saudia Arabia and suppliers of live sheep in parts of the Horn of Africa dealing with drought and domestic conflict causing a potential long term supply shortage. MLA also expects growing flock numbers in WA and lower Australian prices to support the trade in 2023-24.

The new government has confirmed they will ban the live export of sheep, including on airfreight, albeit not in their first term (the next four years). When our key live export markets pair this information with the fact they’ve already had to source sheep from alternative countries for four months of the year for the past three years, then it is likely they will focus even more on sourcing alternative year-round-supply. Domestically, producers (predominantly those in Western Australia) who rely on the trade will also be starting to look for alternative markets, with the possible end of live export on the horizon. These factors are likely to offset the upcoming market opportunities, and restrict significant uptick in numbers sent offshore. 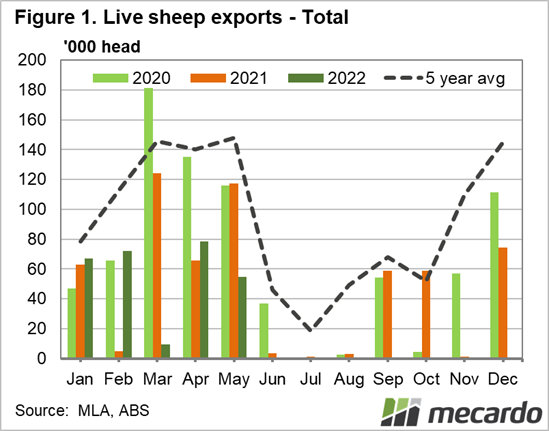