Over the recess in wool auctions, a reader asked how the current price volatility in wool prices stacked up against history. This article takes a quick look back across recent centuries as an answer to this question.

In recent memory, the crash of the early 1990s in wool prices when the average Merino price fell 67% from its peak in 1988 is the big fall, with a subsequent decade of struggling prices under the weight of massive greasy wool stocks. The current downturn is a severe one, with the average Merino price down 47% from its 2018 peak, but this fall is still smaller than the 1974 fall of 58% and is on par with the 45% fall in 1999. The old saw of commodity prices liking to halve and double has held true for both changes in recent years.

So, does the current price fall stand out when viewed against history? Figure 1 shows a series of greasy wool prices spliced together to provide a view of wool prices from the sixteenth century onwards. The prices are shown in 2018 Australian cents per greasy kg terms. If you look closely enough, the recent fall in price can be made out on the graph. The stand-out periods of volatility are in the Napoleonic era (a good time to kick start a wool industry in Australia) and the lesser Korean War spike in price. Prices rose dramatically and then eventually retraced most of the rise in a similar manner. The size of the current downturn (so far) is not extraordinary. What is extraordinary is the second stage of the current downturn, beginning in early 2020 in response to the most severe global pandemic since 1918, which is still playing out.

In Figure 2 the wool price series from Figure 1 is shown from the late 18th century onwards (left hand vertical axis) along with a patched-together cotton price series (in real US cents per pound terms on the right hand vertical axis). The big peak for cotton was during the American Civil War. The 2011 cotton cycle matched this peak price level in nominal terms only. Cotton prices have trended lower in real terms, like wool, since the 1950s. 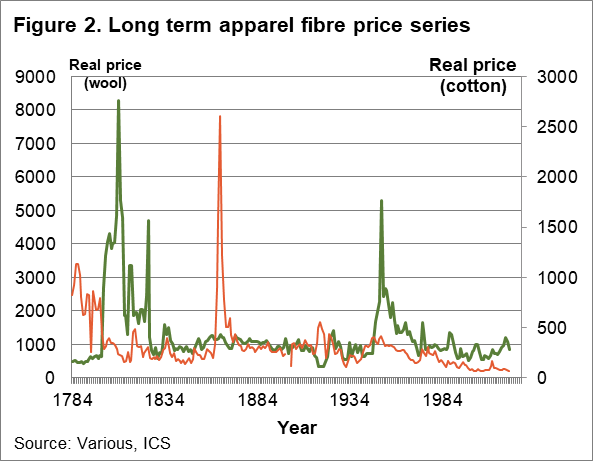