Just when you thought feeder cattle supply couldn’t ramp up any further, the end of December Meat & Livestock Australia (MLA) and Australian Lotfeeders Association (ALFA) survey showed there were plenty of feeders available in the last quarter. This sheds some light on why it took finished cattle prices a while to move.

December was a very big quarter for lotfeeders.  At the end of the year, 1.24 million head of cattle were in feedlots, a new record by 8%.  The increase on the September quarter was 11%, and there were 11.5% more than in December 2018.

Figure 1 shows the record cattle on feed numbers were driven by both strong placements, and slow marketings in December.  Placements of cattle on feed also hit a new record, but only just.  There were 833,739 head inducted into feedlots in December, which was just 0.6% higher than the previous record, set in June 17.

Compared to recent times, placements were up 12% on the September quarter, and 4% on December 2018, likely driven by yet another dry spring.

Lower marketings helped boost cattle on feed numbers. Demand for finished cattle appeared to be a bit weaker in December, with marketings down 7.5% on September, and 13% on December 2018.

Figure 2 shows carry over increased by 8% on the September quarter, and 32% over December 2018.  With so many cattle in feedlots at the end of December, which have been on feed for more than 3 months, it is little wonder it took a little while for finished cattle prices to move in January.

With the cattle on feed numbers now seven weeks old, most of the impacts of record numbers has flowed through the market already.  We are now, however, starting to see feeder prices on the move, with the large numbers of finished cattle having hit the market early in the year leaving plenty of space in feedlots.

With the rain early in the year, record numbers of cattle on feed helped fill the void left by females at processors, but finding young cattle to replace them might be an issue.  December might market the peak of the lotfeeding boom for the next few years. 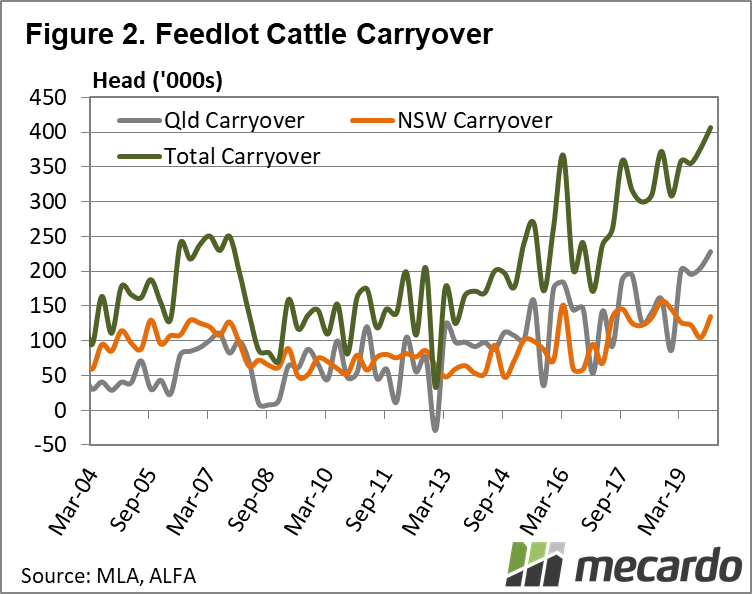