Yield, normally a minor effect on price, has become a major drafting gate for lots in the current market – separating lots achieving full value and those which are discounted. This article takes a look at the effect of yield on Merino fleece.

Mecardo looked at patterns in wool attributes in early March which showed that yield should reach a minimum average level around April/May based on past droughts. The average yield of wool sold in May is running at similar levels to April and with the rainfall so far in eastern Australia, the low point in yield looks to be here. Unfortunately, the low yields are present at a time of much-reduced demand due to COVID-19. Even with limited volumes of greasy wool being offered and sold in the southern hemisphere, discounts for off-types such as very low yielding fleece wool have widened. It is a case of oversupply of low yield wool meeting restricted demand.

Figure 1 shows the distribution of Merino fleece by yield for eastern and Western Australia last week. Yield runs from 30% to 79%, with the main volumes in the yield range of 58% to 67% in both the east and the west. Typically a lot of consignments would be looking to achieve an average yield around 67% for the Schlumberger Dry measure (a little higher for mills using a scoured yield). Figure 1 is based mainly on the Schlumberger Dry yield. To achieve a target average of 67% from the wool shown in Figure 1, the minimum yield needs to be around 60%. This implies that wool below 60% will be discounted due to its low yield.

Figure 2 takes Merino fleece sold last week, which was 70-95 mm long with a staple strength in the range 32-39 N/ktx and vegetable fault limited to 2% and less, expressed the lot prices as a percentage of the relevant eastern MPG (to point one of a micron) and then calculated a median percentage of MPG across all microns by yield (5% increments). Yield ranged from 53% to 78%. Note how the percentage of MPG is close to 100% for eastern Australia for 68% and higher yields. As yield fall below 68%, the proportion of MPG falls, which means the discount for yield is increasing.

Figure 3 repeats the analysis for shorter length Merino fleece (60-69 mm) with a wider range of staple strength. The proportion of MPG falls from 73%, with the discount increasing as yield becomes lower in eastern Australia. The western data shows the reverse which could possibly be due to lower volumes.

Finally, Figure 4 repeats the analysis for longer staple Merino fleece. In the east, the proportion of MPG holds up down to 63% yield, then falls away.

The story of low yield and its effect on price fits with the general pattern of changes in wool supply, being reflected in changed premiums and discounts in the market. This time around the increased supply is at a time of minimal demand so discounts have increased markedly. In looking forward, it is possible to see the supply of low yield wool falling. The key uncertainty is when demand will start to pick up. 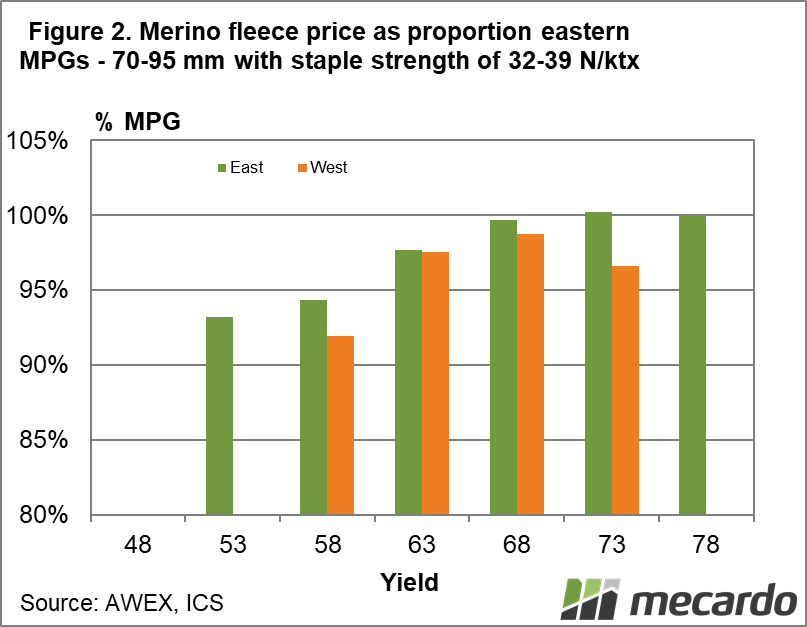 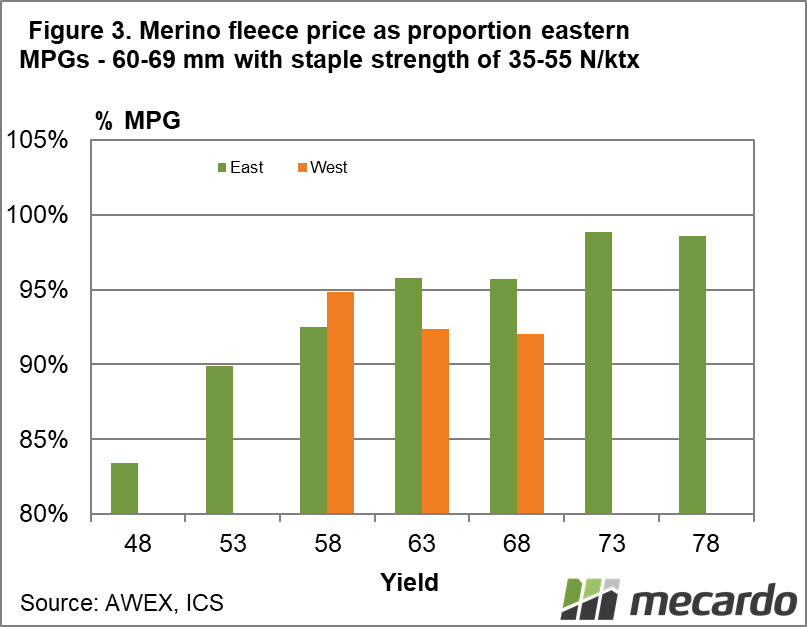 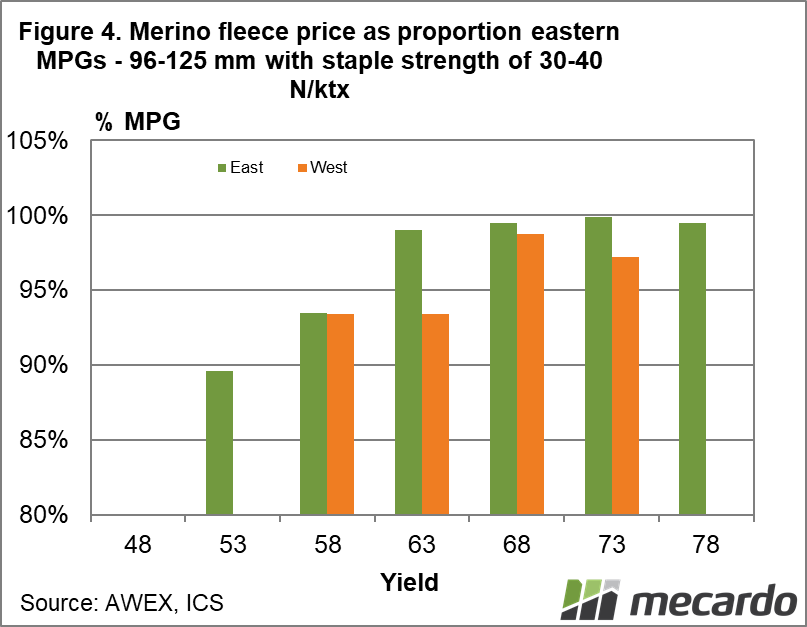