Lower offerings as we head towards the annual recess

We’re into our last month of sales before the annual recess and this weeks’ offering was considerably smaller than the last few months. Most indicators finished the week lower with a few exceptions.

Most of the indicators fell this week although the 17MPG in Sydney & Melbourne lifted by 7 & 24ȼ respectively. The 18.5, 19.5 & 21MPG’s in Melbourne all saw modest lifts between 1 to 13ȼ. It was the 16.5 micron in Melbourne which experienced the biggest fall down 50 cents to finish the week at 2922ȼ/kg, which is still around 1000ȼ higher than the past decades average price. All other fine to medium microns fell between 2 to 24ȼ.

The Western Market Indicator (WMI) followed it’s eastern counterpart down , losing 14ȼ to finish the week at 1490ȼ/kg. All medium to fine indicators in the west were weaker bar the 21MPG which rose by 6ȼ.

Crossbred wools didn’t escape the weaker market falling with only the 26 & 28 MPG’s from Melbourne listed, falling 5 & 17ȼ a piece. Cardings performed poorly, with the all indicators down by around the same amount, falling 47ȼ in Melbourne, 50ȼ in Sydney & by 54ȼ in Fremantle.

As mentioned, bales on offer were well down on this season’s average, this week with only 34,872 bales offered. As a result of the low offerings, bales sold this week fell to 30,292 bales, which is well below this seasons average of 36,250 bales. (figure three) This week’s average pass-in-rate across the states was 13.1%.

This week on Mecardo Andrew Woods took a closer look at the international supply of merino RWS   accredited wool concluding that Australia is currently not the major contributor of this type of wool to the markets, with many other wool producing nations dominating the space at the moment.

Andrew also took another look at wool prices in relation to other major apparel fibres which you can read here.

Next week we have another smaller offering, with only 33,095 bales currently listed for sale with Melbourne & Sydney centres selling on Tuesday & Wednesday while Fremantle is having a week off. 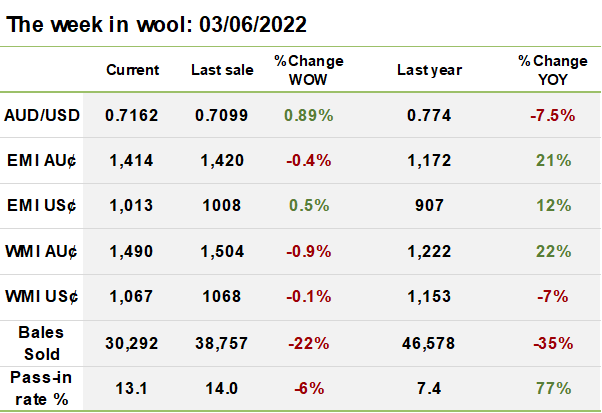 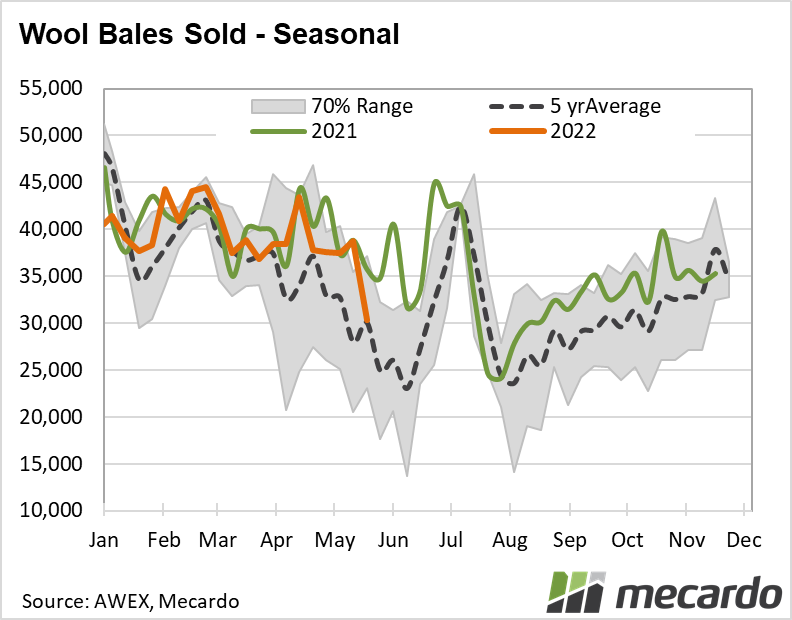