Lucky China loves lamb, as US rules their beef business

While boom and bust cycles are common for most who produce food and fibre, pig farmers in China have been particularly hit hard over the past few years. First, African Swine Fever halved the reportedly 447 million head pig herd, which caused the pork price to skyrocket, and encouraged a tide of new farms into the sector. Then this surge in production - it is now thought the Chinese pig herd is larger than it was prior to the ASF outbreak (figure 1)- alongside impacts of Covid-19, has sent prices plummeting for most of 2021.

While data out of China is to be taken skeptically, most reports show their domestic hog prices have fallen by 65 to 70% since the beginning of this year (figure 2). While they rebounded slightly in October, for the months prior to that, returns were well below cost of production. Looking ahead, according to the USDA, 2022 China pork production is expected to come in 5% below 2021 levels, as the domestic price drop causes another liquidation of the breeding stock.  And as China looks to fill that supply gap, their imports of pork will likely increase by at least the same amount.

Pork isn’t the only protein on the Chinese menu of course. China broke their record for the highest volume of meat imported in a month in March this year, receiving more than one million tonnes shipped weight. Chinese customs data reports for the first eight months of 2021, meat imports to China were up 1.7% year-on-year.

The erratic pork supply and price has allowed beef to gain market share, and the USDA expects Chinese beef imports to grow for the eighth year in a row in 2022. Rabobank reports China as now being the second largest consumer of beef in the world – behind the US. China’s pork woes, alongside a lack of supply or access from other beef exporters such as Brazil and Australia, has allowed it to become the US’ third-largest market for beef, with record volumes sent there in 10 of the past 15 months.

Australian beef exports to China climbed to their second largest monthly volume for the year in October, but the year-to-date total remains more than 40% lower than the previous year. Total beef exports for January to October were back 16%, showing China has taken much more of a hit in this market than other countries. While a lack of supply and sky high domestic prices (not to mention bans on specific Australian processors) has constricted trade with China recently, there is no denying the US has got a serious foothold in the Chinese beef market, and will continue to challenge there.

While beef to China has been one of Australian agriculture’s most lucrative markets in recent years, the country luckily also has a love for our lamb. Australian lamb exports to China have grown 18% for the year to October compared to 2020, while total lamb exports for the same period are only up 3%. (figure 4) Mutton hasn’t seen the same growth though, in fact it has gone the other way – mutton exports have dropped 11% for the year to October. For comparison in 2019 we sent around 12,000 tonnes of mutton to China, this year, half that at just over 6,000 tonnes so far.

Pork remains a mainstay in the Chinese market, but the highs and lows of its current cycle have helped open up even more opportunities – and space – in the country’s meat market. And China’s demand for protein is only set to increase in the new year as Covid-19 impacts play less of a role – hopefully. A lack of major global competitors will keep Australian lamb in demand as our domestic flock growth boosts production, however competition for the beef market will likely only get hotter, especially when Brazilian beef is back on the menu after their BSE ban lifts. 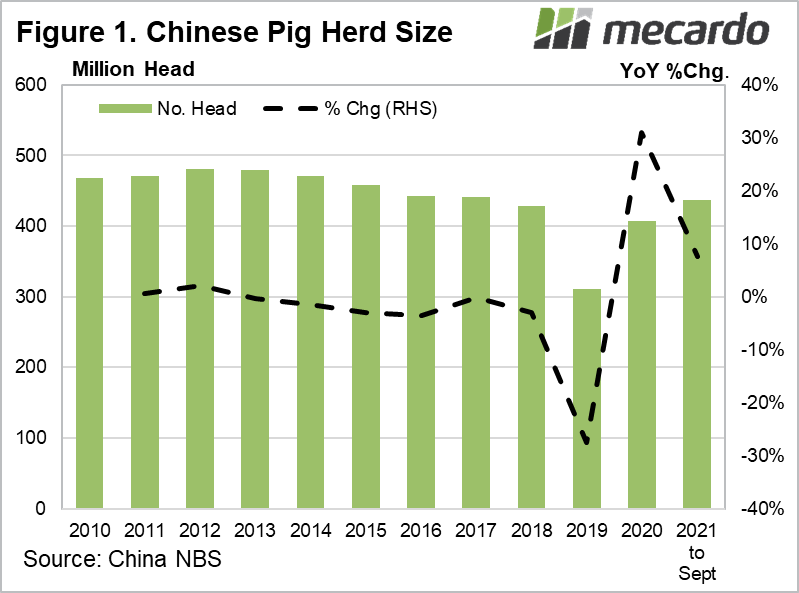 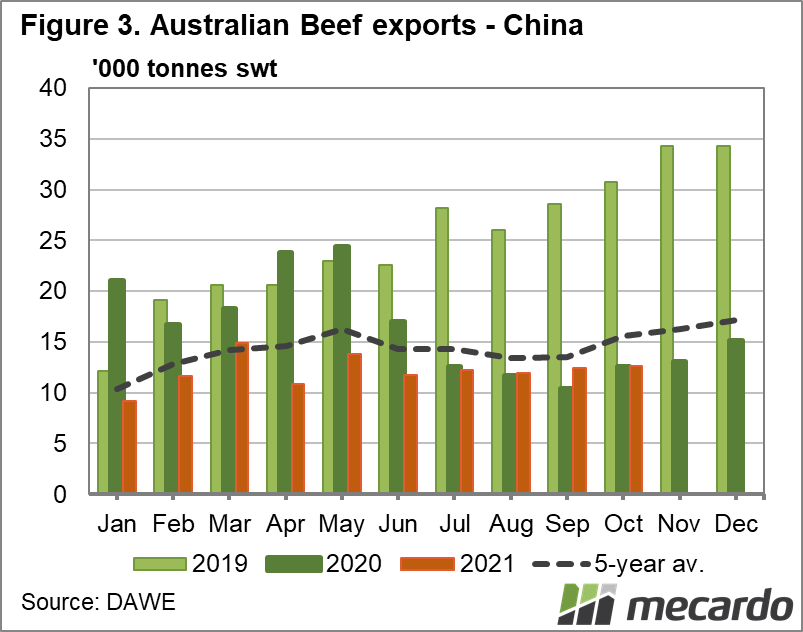