It has been a wild old week in the wheat pit. Wheat and raft of other commodities have been caught up in a global sell off, triggered by the new COVID variant and concerns what that might do to the global economic recovery. It feels like it is the macro economic fac-tors, or maybe just the fears, that is leading the ag commodities lower, but as always there are more sides to this story.

Fundamentally, the story hasn’t really changed for wheat.  Despite ABARES ratcheting up Aussie production to a new record 34mmt, global stocks to use are historically tight. So was the 4% slide in wheat futures justified?

From a technical perspective, managed money has been pouring into the ag commodities, increasing their long (bought) positions – usually a fair sign that the spec crowd are betting on further upside.  Corn is the darling of the spec crowd with a whopping 17:1 long (bought) to short (sold) open positions. (figure 2)

There are factors that can justify a correction in the ag commodities outside of the macro economic headwinds.  Rain in the past fortnight has seen any concerns of dryness ease in the Black Sea region. This should see winter wheat go into dormancy in good shape. The US is also seeing a slow pace of exports due to their relatively uncompetitive prices.  Their winter wheat crop score stabilised at 44% gd-exc last week, including top producing state Kansas at 62% and Nebraska at 64% gd-exc.  Brazil, despite the affirmation of back to back La Ninás, is enjoying a good season with record production for soybeans forecast.

Some doubts are creeping in over China’s appetite for US corn.  They have been buying Ukrainian corn, keeping the US at arms length.  US corn demand will be central to the fortunes of ag commodities going forward.  The last ‘negative’ signal is the market inverse, particularly in Black Sea and European futures that will seemingly have to come into consideration sometime in the first half of 2022.

Of course you don’t have to look too hard to find more optimistic wheat price signals either.  Demand remains strong, the Russians seem even further away from sorting out their export tax issues.  La Niná cannot be ignored, especially in the coming months when South American production hits the critical flowering and grain development stages.  Areas of the Canadian Prairies remain dry and need a good recharge.  And lastly, the cost and availability of fertiliser could very well put a ceiling on global food production at a time when markets are screaming for more.

It’s hard to think that this correction isn’t due for a bounce.  While the energy and financial markets are jittery about a (another) COVID scare, the ag markets should right the ship and start trading on their own fundamentals. 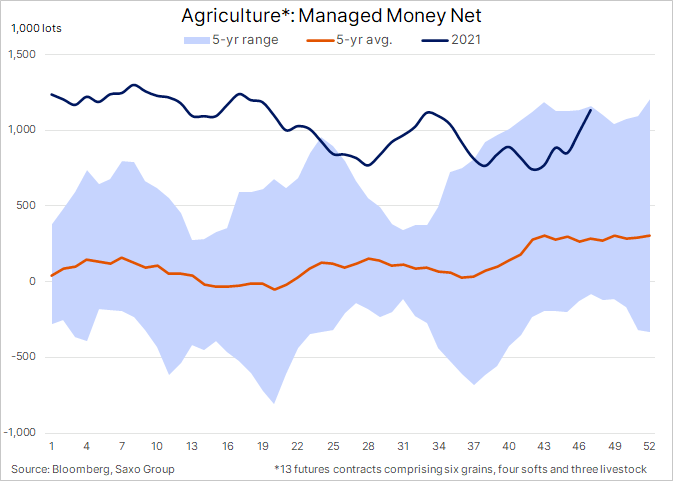