Managed money backs off from US wheat & corn

Speculative interest skulking in commodity futures markets can represent a volatility timebomb which has the potential to amplify price shocks created by market news, or cause strong rallies to fizzle prematurely as profits are taken. But how do we identify whether speculators have hit a market?

The US Commodity Futures Trading Commission (CTFC) releases a weekly report which details what types of traders are holding positions in key commodities in US futures exchanges, called the Commitment of Traders (COT) report.

The report provides insight into the makeup of the market, by shedding some light onto who is participating and to what degree. This is done by categorising bought (long) and sold (short) contracts held in the market (open interest) according to whether the owner of those contracts is a money management firm like an investment fund that is likely to be taking a speculative risk, or a producer or manufacturing end user, who is utilising the futures market for risk management by hedging their physical production or purchasing profile.

Typically, futures market participants like growers and manufacturers, who are hedgers rather than speculators, are unlikely to be exposed to significant potential for generating losses or profits. Anything gained or lost on the futures market is likely to be offset by their interest in the physical commodity related to their core business, which may be farming wheat or corn, or purchasing corn or wheat to manufacture tortillas and bread.

Since their production or purchasing decisions, and risk management decisions are made well in advance, this category of futures market participant as a whole is less likely to make sudden high volumes of trades which are likely to create volatility in the market.

In contrast, when speculators take positions in commodity futures, they are in the business of trying to make money from their investment, and are heavily exposed to fluctuations in the market. If the market moves against a mob of speculators with a long (bought) position, there is the risk that they can rush to sell out in high volumes to stop their losses, causing an even greater price depression, which is why monitoring the amount of contracts speculators hold is important.

If we consider Figure 1, we can see that from early October, managed money (MM) started rapidly building a net bought (long) position in CBOT SRW wheat, which peaked at 50k contracts, representing 10% of all contracts (open interest). Looking at (Figure 3), the same period saw a strong price rise of 15% also, and the peak price point is close to where the speculators begin selling off in earnest, which possibly amplified the price fall instigated by news of rain events in South America and the black sea at the time, which were positive for the world production outlook.

In Figure 2, we can see that since the start of September, managed money interest in corn has accumulated to a significant net long position in excess of 290K contracts; a whopping 26% of the entire market- this peaked at the start of November, and has started to show signs of faltering. Producers & hedgers also appear to be bearish, adding to their sold (short) positions.

With so many speculators betting on higher prices, news that leads to a stumble in price could trigger a torrent of selling, and because of corn’s influence on the feedgrain complex, a period of cheaper corn could weigh on wheat prices also.

Monitoring the magnitude and direction of speculative interest present in international commodity markets like the US can provide signals of imminent upside potential or downside risk. Large accumulations of speculative money lurking in a market can have a negative influence on prices when speculators rush together to take profits, or stem losses. Conversely, their purchasing power can provide buoyancy to prices. Understanding the potential influence of positions taken by managed money is especially important if you plan to utilise international instruments in your risk management strategy. 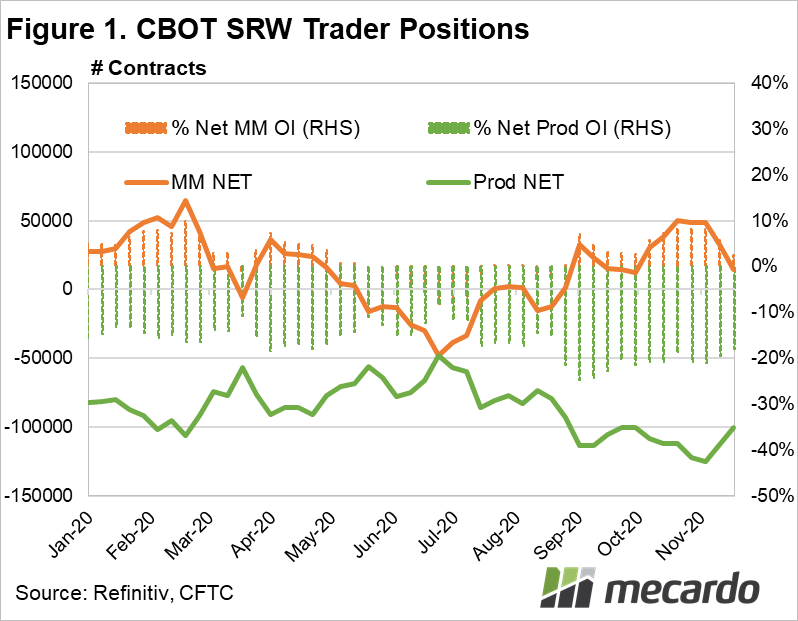