What a strong start to the new year for Sheepmeat! All categories of lamb and mutton set into 2021 much higher than where they left off at the end of the year we’d rather forget. While prices have since softened, low throughput and plenty of confidence has supported the strong opening.

It typically takes a few weeks into January for saleyard supplies to get back to what can be considered “normal” levels for the time of year. Looking at the week ending the 8th of January, 131,865 lambs were yarded on the east coast. This was 14% below the same week the year prior. Victoria was the only state to see higher lamb yardings compared to the same week last year.

Only 39,347 head of sheep trickled into east coast yards, which was 65% fewer than the same week in 2020. Slaughter volumes also painted the picture of low supply. 20% fewer lambs were processed than the same week last year, and 45% fewer sheep.

Saleyard prices certainly started the year with a bang (view here), however they have since softened. The Eastern States Trade Lamb Indicator (ESTLI) ended this week at 828¢/kg cwt, 90¢ higher than it sat a year ago, and 20¢ higher than 4 weeks ago. In the West, the Western Australian Trade Lamb Indicator settled at 713¢/kg cwt, which is a 99¢ gain on the same time last year.

Restockers and light lambs are still leading the charge in terms of price. At 946¢/kg cwt, the National Restocker Indicator is 24% higher than the same time last year. Tassie holds the title of the most expensive restockers in the country on a cents/kg basis at 1082¢/kg cwt.

The National Heavy Lamb Indicator at 815¢ kg cwt on Thursday, lost about 4% over the week but still remains 12% (86¢) higher than the same time last year. Very tight supply didn’t drive a New Year surge for Mutton prices as it did for lamb. The National Mutton Indicator ended the week at 602¢/kg cwt, which is close to the average for December 2020, but still 42¢ higher than the same time last year.

As mentioned by Angus Brown earlier this week (view here) lamb supplies in the first half of 2021 are expected to be tighter than last year which should offer some support to pricing. For the weeks ahead it’s pretty safe to expect supply to increase from last weeks levels, and with plenty of hype for a unifying lamb feast on Australia Day, let’s hope there’s enough to go round to fill the appetite of our number one lamb customer (Australia). 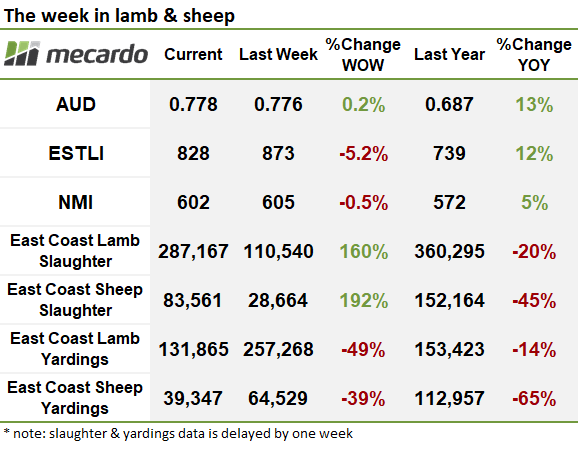 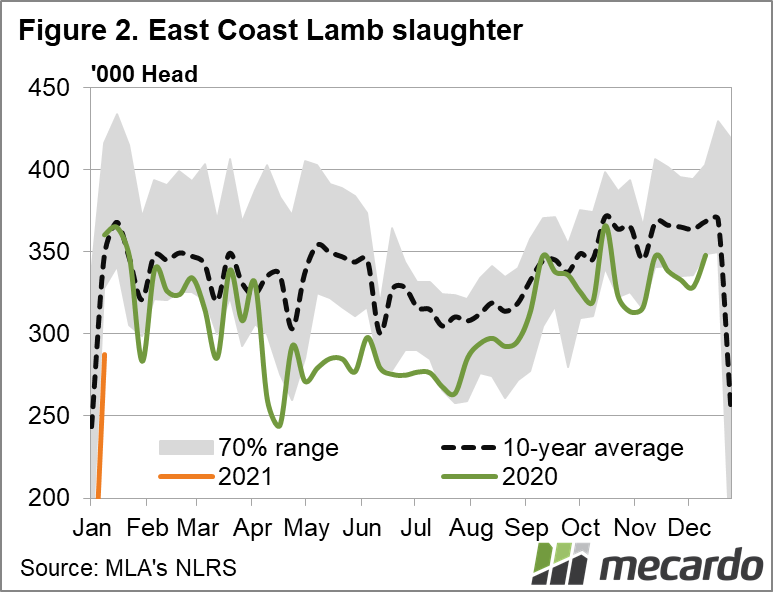