The wool market had a weaker tone this week, however most of the falls were on the first day of selling with a steady result reported on the final day. Supporting the market was the reduced offering partly due to the withdrawal of 5.3% of the offering prior to sale.

The Eastern Market Indicator (EMI) was lost ground falling 21ȼ for the week to close at 1,319ȼ. The Australian dollar was weaker with the US/Au rate quoted at US$0.737, which pushed the EMI in US dollar terms down by 27ȼ to settle at 972ȼ.

Selling last, Fremantle also posted across the board falls. For the week, the Western Market Indicator (WMI) fell 24ȼ cents to 1378ȼ. Fremantle sold 5,088 of the 6,335 bales offered with 19.7% of offered bales passed in.

Selling last on Wednesday, Fremantle posted a steadying result with the WA MPG’s ranging from a -1 to +9 cents movement on the day.

Cardings were mixed, Fremantle fell 20ȼ, while in Melbourne the indicator rose 3ȼ and 14ȼ in Sydney.

This week on Mecardo (view article here), Andrew Woods looked at the prices in the market for wool accredited by the Responsible Wool Standards (RWS). Demand for RWS wool is now strong enough for some large premiums to be present in the greasy wool market. These premiums look to be negatively correlated with the proportion of wool accredited to RWS which makes sense – the less there are, the higher the premiums. This also indicates that with increased supply the premiums are likely to shrink, but given the size of the premiums, there is plenty of scope for them to shrink and still be attractive.

Next week a larger offering is listed for sale in Fremantle, Melbourne & Sydney. All centres are selling on Tuesday & Wednesday with Melbourne adding Thursday to the roster, with 44,754 bales currently rostered. 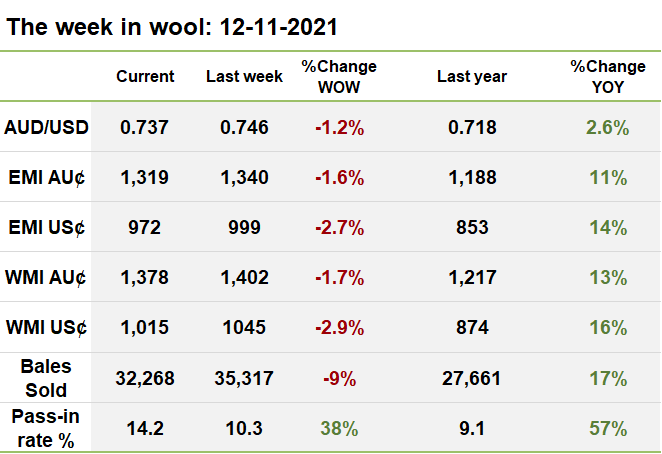