While last week the MPG indicators across the board were showing negative, this week it was a “sea of green”. The market performed strongly on a small offering. From the open in Sydney & Melbourne, through to the final sales in Fremantle on Wednesday, it was obvious that buyer sentiment had improved.

Apparel fibre prices peaked in mid-2018 and then began a cyclical downturn. By late 2019 the average Merino micron price was down by 29-30% in both AUD and USD terms, a modest down cycle over 18 months. Then came the pandemic.

As Andrew Woods wrote on Mecardo, “Since January the price of Merino wool has fallen by 27% in US dollar terms and 23% in Australian dollar terms (monthly averages). The pandemic downturn is a separate and additional downturn to the already existing down cycle from 2018.”

The gains this week in the market were “across the board” with all MPG’s rising, however notable rises were in the 18 to 21 MPG range with 20 to 30 cent gains. Fremantle followed the eastern states lead of Tuesday with 29 – 38 cent gains across its micron range, as well as a 37-cent lift in the Cardings.

A small offering of Crossbred wool came forward and met solid competition, with the strongest rises coming in the 26.0 to 28.0 MPG range. Cardings followed the combing wool lead, with 20, 16 & 37 rises in Sydney, Melbourne & Fremantle respectively.

Next week’s national offering is reduced again to 17,136 bales with only Sydney & Melbourne selling on Tuesday & Wednesday.

Better buyer sentiment and a reduced offering should provide support to the market. 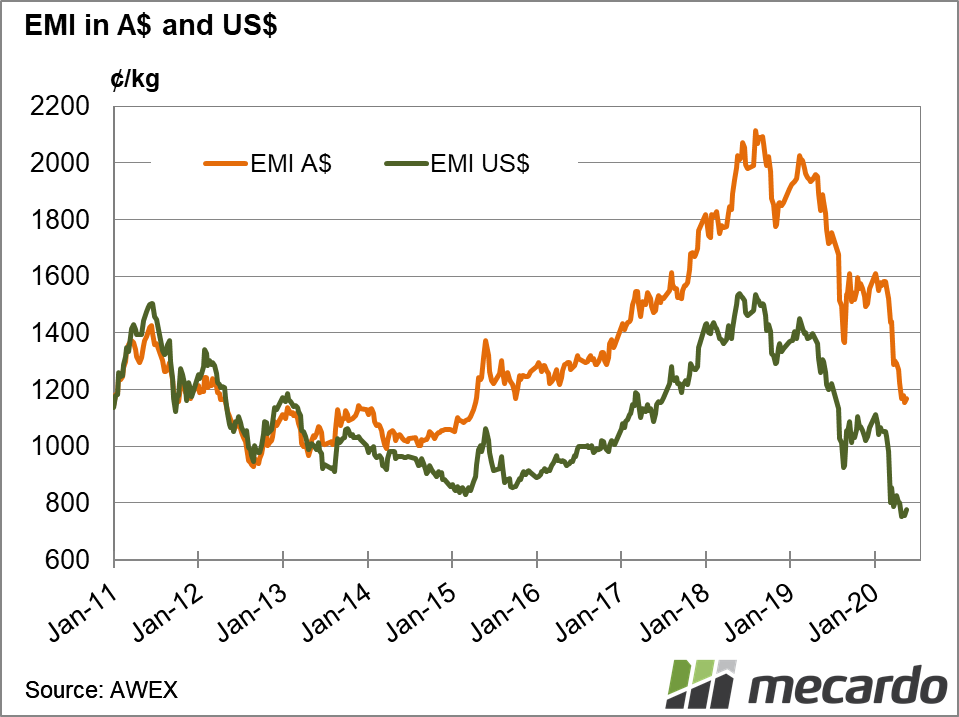