Shipping availability and delays continue to be a concern for exporters as reported by AWEX this week. Delays and backlogs don’t look like easing up anytime soon, due to recent high volumes of overseas sales, combined with lack of shipping availability, we now have most wool stores reporting they are ‘nearing maximum capacity’. Despite concerns these issues would weigh the market down, most indicators performed strongly this week.

The Eastern Market Indicator (EMI) reversed some of the last two weeks falls, gaining 6ȼ on last week to close at 1,413ȼ. The Australian dollar continued to strengthen, improving by 0.25ȼ with the AUD quoted at US$0.7318. This resulted in the EMI in US dollar terms moving up by another 8 cents to settle at 1034ȼ.

Over in the west, the Western Market Indicator (WMI) also posted a rise, up 13ȼ to finish the week at 1457ȼ.

It was mostly green across the board across all selling centres this week bar 16.5 MPG in Melbourne which fell 14 cents & the 17.5 & 21 MPG also in Melbourne didn’t budge. The highest movers for the week were the 16.5  MPG in Sydney which posted a 26ȼ improvement followed by the 18.5MPG also in Sydney which lifted 21ȼ on the week prior. All medium to finer types rose in Fremantle with lifts ranging between 10 to 19ȼ.

Crossbred wools all made modest gains between 1 & 13ȼ bar the 26MPG in Melbourne which fell 3ȼ. Cardings in Sydney were down 5ȼ but firmer in Melbourne & Fremantle rising 3 & 17ȼ respectively.

The national offering fell slightly on last week, by less than 1,000 bales to 49,431 bales. However the national pass-in rate was also down slightly to 10.1% which resulted in a higher number of bales sold this week than last, up nearly 500 more to 44,462.  This was actually the highest bales sold since July 2021.

Sales are scheduled for Wednesday & Thursday only again this week with another large offering of 48,544. 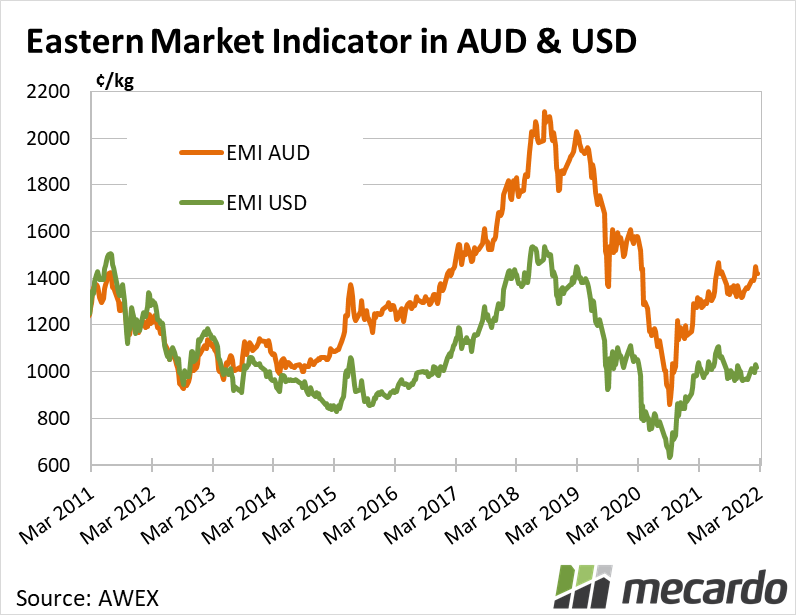