Market up on reduced offering

The reduced offering this week triggered spirited bidding when sales in Sydney & Melbourne opened on Tuesday, with individual fleece MPG’s rising 27 to 53 cents. With only Melbourne & Fremantle selling on the final day, the W.A. market played catch-up however the Melbourne market failed to hold the previous gains and eased with MPG’s retracing 1 to 22 cents.

The Eastern Market Indicator (EMI) lifted 32¢ to close this week at 890¢, losing 7 cents on the final day but overall positive. The AUD was weaker down US$0.135 at US$0.722  which saw the EMI in USD terms also 12¢ higher, closing at 643¢. Fremantle followed suit this week with the Western Market Indicator rising 27¢ and now sitting at 922¢.

This week on Mecardo, Andrew Woods had a look at the down cycles in the wool market back to 1911. Taking a retrospective view as far as wool prices go, 1951 stands out as the peak price point along with high price levels during the First World War. The 2018 peak price took the deflated price back up to late 1988 levels, and now the 2020 downturn has taken the merino price back down to levels last seen briefly in 2009 and before that in 2000.

The current down cycle in merino prices (down 60%) is a large one but not yet as large as the four main down cycles of the 20th century, which fell an extra 10-15%. Unfortunately, this means historically there is some precedent for further downside in the coming months if demand does not improve. It was also noted that “on a brighter note” most of the downside appears to have already occurred for the cycle.

Now, the uncertainty centres on time, and how long before we can expect prices to start picking up.

The crossbred section recorded the largest gains in percentage terms, increases ranging from 25 to 65 cents.

Cardings followed the general market lead to improve in all centres, Melbourne having a 28-cent lift…

The national quantity is up next week, with 33,558 bales listed, with Melbourne & Sydney selling on two days; Fremantle only the one day offering on Wednesday.

The flicker of hope in this week’s market will be tested with the increased supply next week. 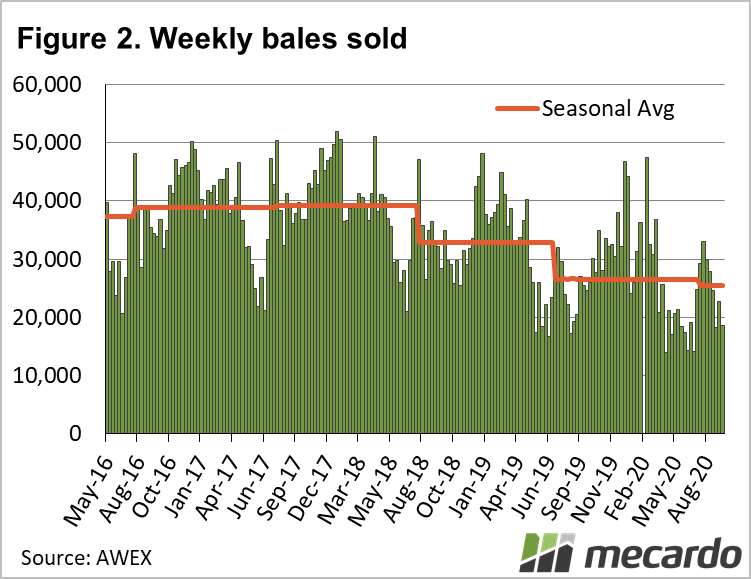