The difference in price between merino micron categories has started to shrink, after expanding rapidly and significantly from mid-2020, and Mecardo had a look at this part of the greasy wool market in detail last month. This article picks up from that article to place the current micron price curve in a long term perspective.

Last month Mecardo looked at the relationship between rainfall (a proxy for seasonal conditions) and the merino average micron (view article here) The nature of rainfall means that change in seasonal conditions between years varies, and that the occasion of wet and dry years also varies. As a consequence change in supply of fine and broad merino wool is inconsistent, as it relies on this variable rainfall in the 12-18 months preceding shearing and sale. So, to place the current micron price curve in perspective this article looks back some four decades.

Figure 1 shows the price difference in cents per kg clean (the spread) between the micron category 2 microns finer than the average merino micron (which has changed with time) and two microns broader, from the mid-1980s onwards. This period has been chosen as it covers the modern greasy wool market which emerged in the 1980s as a combination of technology (containerisation, objective measurement, the development of the TEAM formulae) and demand (the desire for lighter weight fabrics) underpinned the increase in value of fibre diameter as a characteristic in the greasy wool market.

As Figure 1 shows the spread in price (currently between 17 and 21 micron) has been at its greatest in recent quarters, and remains at extremely high levels. The implication is that this level of premium is unlikely to be sustainable in the medium to long run.

The logical question is, “where is the sustainable level for micron premiums and discounts?”. The answer is that there is no simple level, more like a longer term average about which the micron premiums and discounts fluctuate. If we could flatten out the rainfall to a nice consistent level year in and year out we would take a lot of the variation in supply away and in doing so lower the variation in price. It is not going to happen.

Figure 2 has a stab of looking at where the longer run micron price curve is. It shows the current merino micron price curve (November to date) for combing fleece wool. The prices have been set relative to the 19.5 micron price (which equals zero). In addition, the median micron curve for the past 15 years is shown. This period is selected as it covers the recent changes to the Australian merino clip where fine wool volumes increased and broad micron production was reduced. Figure 2 matches the picture given by Figure 1. As an example the 17 to 19.5 micron difference in price is currently 886 cents, with the 15 year median level a much lower 260 cents.

Agriculture involves constant swings in production and price, with rainfall a big driver of the swings in production. Fine wool producers have been on the benefit side of increased premiums since mid-2020, and now the cycle is turning the other way, although premiums still remain very high. Another swing is begging, this time a downward cycle in the merino micron premiums and discounts, although we do not know exactly where to. 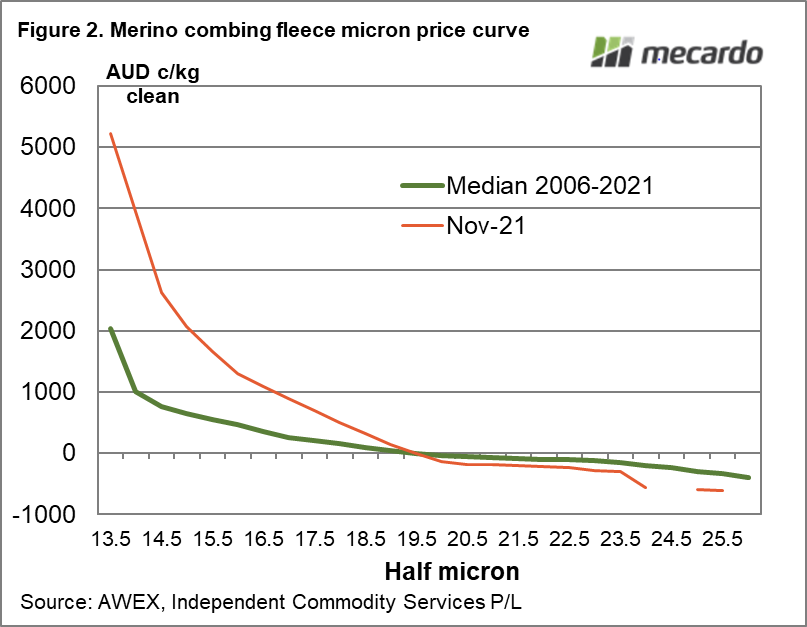